Items related to The House of Windjammer

Richardson, Viv The House of Windjammer 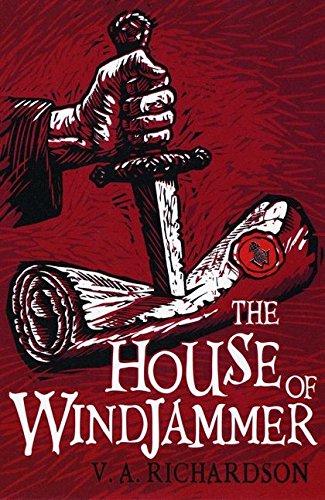 Adam Windjammer, head of the family, head of the business, fifteen years old. 1636 The fortunes of the House of Windjammer are tied to their ships, and when Sirius goes down with the rest of the Star Fleet, the Windjammers are dragged down with it. Only by finding the Black Pearl - a rare and precious tulip - can Adam hope to protect his mother and sisters from ruin and from the predatory clutches of the moneylender, Van Helsen. But it's a shady business, and there are those who will stop at nothing to get what they want... The first book in the 'Windjammer' series, this energetic adventure will have readers on the edge of their seats.

The first of VA Richardson's sequence of historical romances about Dutch traders, The House of Windjammer has all the chiaroscuro and busy-ness of the Rembrandt paintings that form a significant part of its inspiration. The plotting is the purest of melodrama and Richardson has no especial commitment to avoiding cliché--but there is a conviction here and a sense of a society that is all about bustle and feeling righteous and the complex hypocrisies that go with them.

The Windjammers lose their merchant fleet to a storm off the Americas and the young heir fights his uncle for control and a conniving banker, Hugo, for the right to send their remaining vessel on a rescue mission. Adam is pursued by a murderous preacher to whom the mob listens and is in ambivalent love with Hugo's daughter Jade. In addition, we have the inflationary craze for tulips getting progressively out of control with masked figures in low taverns exchanging notional fortunes for a couple of bulbs. There is an intensity and sense of place to this at its best which bodes well for the series as a whole, as well as some lazy use of default plot elements which does not. --Roz Kaveney

'Its vivid, atmospheric writing tells a gripping tale of the Windjammer family's fall from fortune in 17th-century Amsterdam.' -- Irish Times

The House of Windjammer (Paperback)

Book Description Paperback. Condition: New. New edition. Language: English. Brand new Book. "They were lost. All aboard the 'Sirius' knew it now. 'Damn and blast this fog!' cursed Lucien Windjammer under his breath. 'Silence!' he roared out loud. 'For the love of God, not a man shall speak!' An uneasy quiet fell over the crew as he struck a note from the bell. Too late. Ahead of them the fog parted briefly. As the fog rolled back, the blunt face of a cliff jumped skywards. 'Reef! Dead ahead. Rocks!' And in that moment all aboard the 'Sirius' knew that awesome monument would be their gravestone." The fortunes of the trading House of Windjammer are inextricably tied to their ships. And when the ship Sirius goes down, the House is dragged down with it. At the age of sixteen, Adam Windjammer is forced to become a man as his family is torn apart round his ears. Trying to protect his mother and his sisters from the predatory business clutches of the banker Van Helsen, and also from his inept and greedy uncle Augustus, Adam feels besieged on all sides. Who can help him now his father has gone? Adam feels only too hard the weighty burden of the Windjammer ring.And Adam can't help being suspicious too of Gerrit, the long-serving family accountant, creeping out at all hours of the night .Adam gets a huge shock when he finally understands the shady and risky business that Gerrit has become involved in. An incredibly colourful and atmospheric novel that paints an evocative picture of living in the bustling, often dangerous sailing port of Amsterdam, where so many livelihoods are tied to the arrival (or not) of the latest ship. Fast-paced and incredibly action-packed, and touching on the tulip mania that enveloped Amsterdam, it will have both boy and girl readers on the edges of their seats as Adam faces the latest twist that Fate deals him. Seller Inventory # AA79780747591610

The House of Windjammer: Rejacketed

Book Description Paperback / softback. Condition: New. New copy - Usually dispatched within 4 working days. The fortunes of the trading House of Windjammer are inextricably tied to their ships. And when the ship Sirius goes down, the House is dragged down with it. At the age of sixteen, Adam Windjammer is forced to become a man as his family is torn apart round his ears. Who can help him now his father has gone?. Seller Inventory # B9780747591610