Items related to The Human Voice 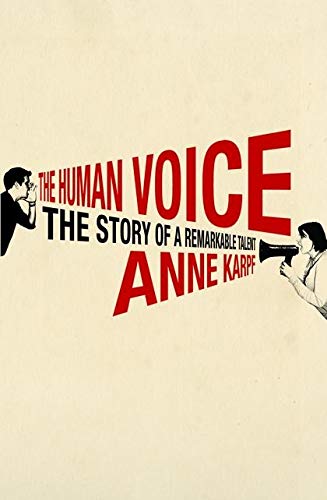 We live in an age when a hi-tech gadget that could reveal a person's size, height, weight, gender, sexual orientation, social class and race in less than sixty seconds sight unseen is no longer the stuff of science fiction. Yet, as Anne Karpf's engrossing book reveals, this amazing instrument already exists and has done for centuries. It is the human voice - the key to communication and our ability to read between the emotional lines. Beginning with a description of how the voice actually works, Anne Karpf goes on to investigate its vital role in the bonding of mothers and children, and eventually in all social interaction. She then opens the story out to explore the voice's psychological, social, emotional and cultural significance, investigating and challenging received wisdom of all kinds, from the stereotype of silent men and talkative women and the theory that only 7 per cent of our meaning is carried in the words we use, to the fascinating insight that children who have difficulty decoding voices are likely to be less popular with other children as early as kindergarten, and that we can recognize the emotion in another person's voice with in sixty milliseconds of first hearing them speak. Whether revealing the evocative power of famous voices or facing the fear that modern technology may render the human voice redundant, this fascinating book makes it clear that today, more than ever, the voice is the most important sound in our lives.

PRAISE FOR 'THE WAR AFTER' 'A vibrantly lively memoir about growing up in a Holocaust home... At times brutally sad, THE WAR AFTER is also a rich and funny exploration of the struggle between a child and her parents' Independent on Sunday 'Fascinating and revealing' Literary Review 'Anne Karpf is a skilled storyteller, moving naturally between her own history and that of her parents in a way that neither intrudes nor distorts' Times Literary Supplement

Anne Karpf is a writer, sociologist and award-winning journalist. Born in London to Polish-Jewish Holocaust survivors, she studied at Oxford, and then worked in BBC Television. She has been a contributing editor to Cosmopolitan, a book reviewer for The Times, and for seven years was radio critic of the Guardian, where she now writes a weekly column for the Saturday 'Family' supplement. After gaining a postgraduate degree in the Sociology of Health and Illness, she taught medical students at London University. She broadcasts on radio and television, and teaches at London Metroplitan University. She lives in London.