Items related to I Saw Ramallah 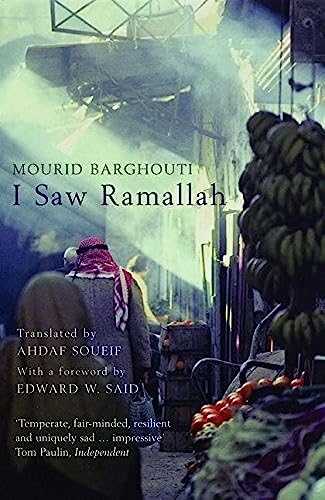 In 1966, the Palestinian poet Mourid Barghouti, then twenty-two, left his country to return to university in Cairo. A year later came the Six Day War and Barghouti, like many Palestinians living abroad, was denied entry into his homeland. Thirty years later, he was finally allowed to visit Ramallah, the city he had grown up in. A rickety wooden bridge over a dried-up river connects the West Bank to Jordan. It is the very same bridge Barghouti had crossed little knowing that he would not be able to return. I Saw Ramallah, his extraordinarily beautiful account of homecoming, begins at this crossing, filled with its ironies and heartaches. In half bemusement, half joy, Barghouti journeys through Ramallah, keenly aware that the city he had left barely resembles the present-day city scarred by the Occupation - and he discovers in this displacement, that the events of 1967 have made him permanently homeless.

‘Barghouti manages to be temperate, fair-minded, resilient and uniquely sad. This is an impressive addition to the literature of exile’ -- Tom Paulin, Independent

‘Intensely lyrical ... Much of this beautifully written and evocative book is a lamentation on the conditions of exile’ -- Guardian

‘Moving and thoughtful ... compelling ... Barghouti’s description of his return to Ramallah is impassioned’ -- Metro

‘Thoughtful, unsentimental, extraordinary ... It has universal appeal ... you must read it’ -- Sunday Business Post

Mourid Barghouti was born in 1944 near Ramallah. He has published thirteen books of poetry in Arabic including a Collected Works (1997) and was awarded the Palestine Award for Poetry in 2000. Mourid Barghouti lives in Cairo with his wife, the novelist Radwa Ashour. His first collection of poems, 'Midnight' will be published by Arc in October 2008. About the translator Ahdaf Soueif is the acclaimed author of four books, including the international bestseller and Booker Prize-shortlisted The Map of Love .

Book Description Paperback. Condition: Very Good. The book has been read, but is in excellent condition. Pages are intact and not marred by notes or highlighting. The spine remains undamaged. Seller Inventory # CIN000448347

Book Description Paperback. Condition: Very Good. The book has been read, but is in excellent condition. Pages are intact and not marred by notes or highlighting. The spine remains undamaged. Seller Inventory # GOR003023322

Book Description Paperback. Condition: Fair. A readable copy of the book which may include some defects such as highlighting and notes. Cover and pages may be creased and show discolouration. Seller Inventory # GOR008818725

Book Description Condition: Good. A+ Customer service! Satisfaction Guaranteed! Book is in Used-Good condition. Pages and cover are clean and intact. Used items may not include supplementary materials such as CDs or access codes. May show signs of minor shelf wear and contain limited notes and highlighting. Seller Inventory # 0747574707-2-4

Book Description Paperback. Condition: Good. Small annotations to some pages, may include notes, highlighting or underlining Good condition is defined as: a copy that has been read but remains in clean condition. All of the pages are intact and the cover is intact and the spine may show signs of wear. The book may have minor markings which are not specifically mentioned. Most items will be dispatched the same or the next working day. Seller Inventory # wbb0017980851

Book Description Paperback. Condition: Used; Good. **Simply Brit** Shipped with Premium postal service within 24 hours from the UK with impressive delivery time. We have dispatched from our book depository; items of good condition to over ten million satisfied customers worldwide. We are committed to providing you with reliable and efficient service at all times. Seller Inventory # 1187959