Items related to Moondust: In Search of the Men Who Fell to Earth

Smith, Andrew Moondust: In Search of the Men Who Fell to Earth

Moondust: In Search of the Men Who Fell to Earth 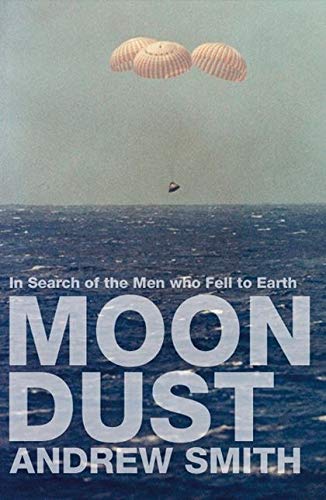 In 1999, Andrew Smith was interviewing Charlie Duke, astronaut and moon walker, for the Sunday Times. During the course of the interview, which took place at Duke's Texan home, the telephone rang and Charlie left the room to answer it. When he returned, some twenty minutes later, he seemed visibly upset. It seemed that he'd just heard that, the previous day, one of his fellow moon walkers, the astronaut Pete Conrad, had died. The more Charlie spoke the more Andrew realised that his grief was something more than the mere fact of losing a friend. 'Now theres only nine of us,' he said. Only nine. Which meant that, one day not long from now, there would be none, and when that day came, no one on earth would have known the giddy thrill of gazing back at us from the surface of the moon. The thought shocked Andrew, and still does. Moondust is his attempt to understand why. The Apollo moon programme has been called the last optimistic act of the 20th Century. Over a strange three year period between 1969 and 1972, twelve men made the longest and most eccentric of all journeys, and all were indelibly marked by it. In Moondust Andrew sets out to interview all the remaining astronauts who walked on the moon, and to find out how their lives were changed for ever by what had happened. 'Where do you go after you've been to the moon?' In addition to this question that would prove hugely troubling to many of the returned astronauts, they also had to deal with the fantasies of faceless millions at their backs, for this was the first truly global media event. The walkers would forever be caught between the gravitational pull of the moon and the earth's collective dreaming.

**** RECOMMENDED [A] fascinating book... Smith is certainly no techo-geek and does not shy away from the more personal questions -- Craig Brown in THE MAIL ON SUNDAY

A moving and thorough account of America's last great act of optimism. -- Guardian

He is a graceful, easy-going writer, and this beguiling tale is replete with joyful wonder. -- The Sunday Times

Smith deftly integrates the experiences of the lunar astronauts into the political and cultural contexts of their various missions. -- The Sunday Times

An interview with Andrew Smith

Do you think it makes a real difference to a person's character if they can remember the moon landings?

No, not to their character, but I do think a little corner of everyone’s psyche is frozen at the age they were when the first landing took place. I’ve noticed that when people who were children at the time talk about Apollo, they tend to sound like children again (this is true even for conspiracy theorists, I think). The moon landings mean so many different things to different people: someone called Apollo the last optimistic act of the Twentieth Century, which is glorious, but carries a kind of pathos, too.

You must have had a preconceived idea of what to expect from the moonwalkers. In what way were these expectations confounded?

I thought they’d be straight, conservative military pilots and engineers, but they mostly weren’t - they were much more diverse and eccentric than I’d expected. Only part way in did it dawn on me that they became pilots because they’d watched the pilots of World War II save us from Nazism; that c pilots were to them what rock stars became for me as a child. And that they’d been drafted.
And was it a very emotional experience?

It was very emotional as it involved revisiting a time when significant numbers of people believed that the world could be made better - where innocent optimism was still possible. My own adolescence was defined by Punk, industrial strife, unemployment and a feeling that the world would inevitably get worse, and I think this is why the Sixties are still fascinating to us, whether we experienced them or not. Like the Beatles and the Stones, Apollo’s bizarre tilt at the Moon could only have happened in that decade.

Which of the Astronauts made most of an impression on you?
They all did in different ways, even though my encounters with them varied wildly. Buzz Aldrin is such a complicated man, impenetrable one moment, then boyishly candid the next - I left his apartment feeling as though I’d gone twelve rounds with Mike Tyson (or perhaps Frank Bruno). On the other hand, Alan Bean, who became an artist when he left NASA, has extraordinary charisma and may well be the happiest man I’ve ever met. I came away feeling slightly different about the world and still feel lucky to have crossed his path.

The moon has cast a spell over man for millennia –– do you think that the lunar landings might have broken its mystique?

An interesting question, because some people had feared that it would (Tom Stoppard wrote a play about it, Jumpers). Had they carried on, I suppose they might have. But the fact that the landings only happened for three years, then stopped abruptly, seems to me to have increased the mystique - the moreso because going to the Moon looks even harder and more remote now than it did then, despite all the technological advances we’ve made. The longer you look at the tools they had to work with, the more you wonder how they managed to pull it off. That’s why only 27 people have ever left Earth orbit and headed for Deep Space, all between the Christmases of ‘68 and’72.

What about the moon conspiricists? Is there any chance that it was all a hoax?

Personally, I’d love to believe that the landings had been a hoax, because fooling the whole of humanity in that way, and maintaining the pretence for so long, would look to me like a greater technical and creative achievement than actually going. And arguably more significant. Unfortunately, anyone who looks at the issue seriously will see that, while there’s an impressive volume of rumour, heresay and myth, if you sift through the ‘evidence’ a piece at a time, you find that every last one falls down - often pretty abjectly. All the same, I see the conspiracy theorists as an important part of the story I’m telling, and I’m glad they’re there.

Do you think we could consider going back to the moon in the near future?

The Chinese have taken a characteristically careful, pragmatic approach, such as America and the USSR might have but for the strange set of circumstances which prevailed in 1961 (the year John F Kennedy capriciously launched his people at the Moon). Their ride will probably be less interesting, but they may get better results in the long term. At the same time, the difference between going into Earth orbit and going to the Moon is like the difference between climbing a hill and flying. The Chinese have only reached Earth orbit so far, which is pretty routine these days: and the reason no one’s left Earth orbit since 1972 is because, assuming you want to come back, it’s a very, very hard thing to do.

Many have reported a spiritual experience as a result of their visit to the lunar surface –– how do you think this can be accounted for?

You’re given the chance of going to the moon tomorrow –– do you go?

When I was researching the book, I let my two small children watch Ron Howard’s film about Apollo 13, the mission which nearly ended in disaster. Now my son asks me anxiously at regular intervals whether I’ll have to go to the Moon, while my daughter simply informs me that I’m not allowed to. So I’ll have to wait until they’ve left home, but in the meantime it makes an excellent threat when I want them to tidy their bedrooms.

What do you do after you’ve written a book about going to the moon?

Ideally, go on a long holiday, then choose something more sensible for your next book. Or, in an effort to follow Neil Armstrong’s example in getting back in touch with ‘the fundamentals of the planet,’ start that goat farm you’ve always dreamed of.

1. Moondust: In Search of the Men Who Fell to Earth

Book Description Bloomsbury Publishing PLC, 2005. Hardcover. Condition: Used; Good. **Simply Brit** Shipped with Premium postal service within 24 hours from the UK with impressive delivery time. We have dispatched from our book depository; items of good condition to over ten million satisfied customers worldwide. We are committed to providing you with reliable and efficient service at all times. Seller Inventory # 1023505

2. Moondust: In Search of the Men Who Fell to Earth

Book Description Bloomsbury Publishing PLC 04/04/2005, 2005. Condition: Very Good. Shipped within 24 hours from our UK warehouse. Clean, undamaged book with no damage to pages and minimal wear to the cover. Spine still tight, in very good condition. Remember if you are not happy, you are covered by our 100% money back guarantee. Seller Inventory # 6545-9780747563686

3. Moondust: In Search of the Men Who Fell to Earth

Book Description Bloomsbury Publishing PLC 04/04/2005, 2005. Condition: Very Good. This book is in very good condition and will be shipped within 24 hours of ordering. The cover may have some limited signs of wear but the pages are clean, intact and the spine remains undamaged. This book has clearly been well maintained and looked after thus far. Money back guarantee if you are not satisfied. See all our books here, order more than 1 book and get discounted shipping. . Seller Inventory # 7719-9780747563686

4. Moondust: In Search of the Men Who Fell to Earth

Book Description Paperback. Condition: Very Good. The book has been read, but is in excellent condition. Pages are intact and not marred by notes or highlighting. The spine remains undamaged. Seller Inventory # GOR001241125

5. Moondust : In Search of the Men Who Fell to Earth

6. Moondust: In Search of the Men Who Fell to Earth

Book Description Bloomsbury Publishing PLC, London, 2005. Hard Cover. Condition: Fine. Dust Jacket Condition: Fine. First Edition. No marks or inscriptions. A very clean very tight copy with bright unmarked boards and no bumping to corners. Dust jacket not price clipped or marked or torn or creased. 308pp. The author finds and interviews the remaining nine of the original astronauts who landed on the moon in order to learn how their lives, and ours, were changed for ever by this surreal adventure. We do not use stock photos, the picture displayed is of the actual book for sale. Every one of our books is in stock in the UK ready for immediate delivery. Size: 9.5 x 6.25 inches. Seller Inventory # 021217

7. Moondust: In Search of the Men Who Fell to Earth