Items related to The Little Friend 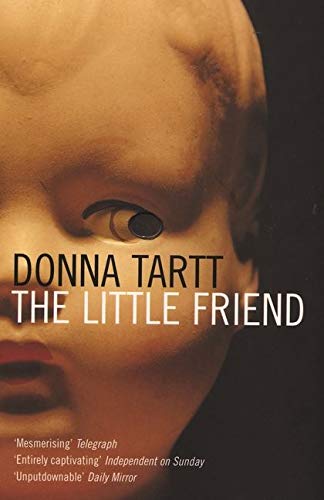 Ten years in the writing, it can hardly be said that The Little Friend, Donna Tartt's second novel and the follow-up to her phenomenally successful and assured debut The Secret History, was rushed out. But was it worth the wait? Write about what you know is an old adage and much of the appeal of her first book was that its sense of place--an exclusive New England campus was clearly and so adroitly drawn from intimate experience. Here, the Mississippi-born Tartt utilises, piercingly on occasions, the American landscape of her own childhood.

The Cleves--Charlotte, Grandma Edith, Great Aunt Adelaide, Aunts Libby and Tat--are a southern family of noble stock but, by the early 1970s, diminished numbers and wealth; haunted by the motiveless, unsolved murder of 9-year-old Robin, "their dear little Robs", a decade earlier. (The novel opens, a la Bunny's corpse in The Secret History, with his body found hanging from a black-tupelo tree in the garden: "the toes of his limp tennis shoes dangled six inches above the grass.") Harriet, Charlotte's youngest child, "neither sweet nor pretty" like her sister, Allison, but "smart" was a baby when Robin died. Now a precocious, bookish pre-teen, she is convinced she can unravel the mystery of his death. Her chief suspects are the Ratliffs, a local clan of speed-dealing ne'er-do-wells, one of whom, Danny, had been in Robin's class. (The Ratliffs own sorry histories, and in particular the corrosive influence of matriarch Gum, are tidily juxtaposed throughout the book with the varying fortunes of the Cleves.) Harriet enlists Hely, her willing schoolyard disciple, to help investigate.

For a while the novel takes on a positively Nancy Drew-esque hue; Harriet and Hely the spies, sneaking into buildings, making off with poisonous snakes and escaping from drug-addled trailer trash on bicycles. In a significant departure from The Secret History though, Tartt does not seem unduly concerned about plot and, or, pacing. She's interested in characterisation and the bickering aunts and so many of the minor characters, the odious car dealer Mr Dial, for example, "all rectitude and pickiness, sweet moral outrage itself", are realised wonderfully. This isn't to say it's not well plotted; it is, as the dénouement eventually reveals, but it is rather languid and things can get a bit soggy midway. (Overuse of the adjective "stolidly", a word that unavoidably, if quite erroneously, calls to mind heavy fruitcake, doesn't really help either.) Tartt's Southern Gothic saga may lack the page-turning thrill of her last novel but it's, ultimately, a no less impressive or rewarding work of fiction. --Travis Elborough

'Beautifully measured prose that sets the scene draws us into the extraordinary story that lingers long in the mind.' (The Observer)

'You leave the book mesmerised by the world ... Brilliant.' (The Irish Independent)

'Beautifully written and immaculately crafted ... even though there's humour, the tension is palpable. Unputdownable.' (Daily Mirror)

'Harriet is one of the most engaging and rounded characters you are likely to find ... gorgeous, fluent, visual.' (The Times)