Items related to If Nobody Speaks of Remarkable Things

McGregor, Jon If Nobody Speaks of Remarkable Things 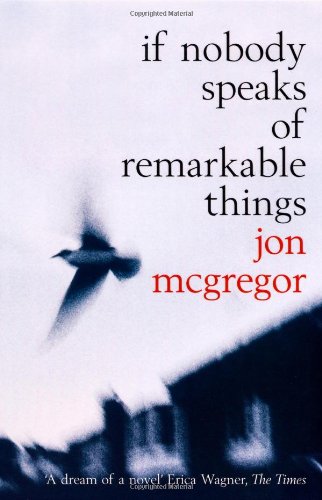 'This novel owes as much to poetry as it does to prose. Its opening, an invocation of the life of the city, is strongly reminiscent of Auden's Night Mail in its hypnotic portrait of industrialised society...An assured debut' Erica Wagner, The Times. On a street in a town in the North of England, ordinary people are going through the motions of their everyday existence - street cricket, barbecues, painting windows...A young man is in love with a neighbour who does not even know his name. An old couple make their way up to the nearby bus stop. But then a terrible event shatters the quiet of the early summer evening. That this remarkable and horrific event is only poignant to those who saw it, not even meriting a mention on the local news, means that those who witness it will be altered for ever. Jon McGregor's first novel brilliantly evokes the histories and lives of the people in the street to build up an unforgettable human panorama. Breathtakingly original, humane and moving, IF NOBODY SPEAKS OF REMARKABLE THINGS is an astonishing debut. 'The work of a burning new talent ...Jon MacGregor writes like a lyrical angel' Daily Mail

"McGregor's publishers must be openly rejoicing ...'If Nobody Speaks Of Remarkable Things’ is the work of a burning new talent." -- Elizabeth Buchan, Daily Mail, 24th August 2002

"Mcgregor is an exemplary archivist of the humdrum ... written by someone who detects so passionately the remarkable in the everyday." -- The Spectator, 18th January 2003

"You won't read anything much more poignant than this." -- Daily Telegraph 17th September 2002

I was born in Bermuda in 1976, grew up in Norfolk, went to university in Bradford, lived in Sheffield for a year after university and now live in Nottingham with my wife Alice. I began writing at university and had a collection of short stories - "Cinema One" Hundred - published within an anthology called "Five Easy Pieces" by Pulp Faction in April 1998. I also had a short story, "While You Were Sleeping" broadcast on BBC Radio 4 in June 1999. I then got a literary agent who said that I should write a novel and "If Nobody Speaks of Remarkable Things" was written largely over the last two years on a narrowboat in Nottingham. This year Granta Magazine has published another of my short stories in their June issue and You Magazine (Mail on Sunday) have commissioned another short story which I'm working on now as well as writing my second novel.

In the summer of 1997, a boy was shot in Bolton, round about the same time that Diana died. This got me thinking about the significance that gets attached to people's lives and deaths, about perceived levels of tragedy and newsworthiness. I was interested in the anonymity of city life, the fact that I still didn't know my neighbours after three years, the damage that transience does to the community. And a few almost-terrible incidents in the street I was living in at the time gave me the magic What If that fiction always requires.

However, it took me a long time to develop that into anything useful or compelling - there were a lot of false starts and cul-de-sacs. In particular I was using the hook, for a long time, of setting it on the day of Diana's death and making the stories revolve around that. It took me a long time to drop that idea, but it needed dropping; it was too melodramatic and artificial, and it detracted from the characters and stories of the people on the street. I've left in a faint reference to that whole concept though; the story is still set on that day, but without any mention of it beyond a reference to the date - a counterclaim for the importance of other people's lives.

The character of the narrator - and therefore the hook and drive of the novel as a coherent whole - didn't come until May 2000, when I went to Japan to visit a friend and he showed me the Buddhist temple at Kamakura, where they have a shrine for mothers of stillborn/aborted children. This sparked off a chain of thought about what a responsibility and a fear pregnancy must be, which gradually rolled into a storyline able to tie together what was happening in the street. So in a sense I only really started writing the novel then, but I was pulling in a lot of material written previously to that and as a result finished an initial version in March 2001.

So that's the mechanics of it. A list of things I was thinking about whilst writing it would include; ideas of connection and misconnection, the prominence of celebrity, the importance of unwitnessed lives, an assertion that the job of a writer is to bear witness to that which would otherwise go unnoticed, the namelessness/anonymity of contemporary city life, the nature and/or existence of miracle, the avoidance of overt interpersonal communication, and tea.

Book Description Paperback. Condition: New. First Printing. Carefully packaged and shipped within 24 hours! Most CDs and books have multiple editions; if you want a specific edition please ask via email.Book is in perfect condition and will be SHIPPED WITHIN 24 hours of receiving the order!. Seller Inventory # BX17-1411

IF NOBODY SPEAKS OF REMARKABLE T