Items related to Harry Potter and the Chamber of Secrets (Book 2): Adult...

Harry Potter and the Chamber of Secrets (Book 2): Adult Edition 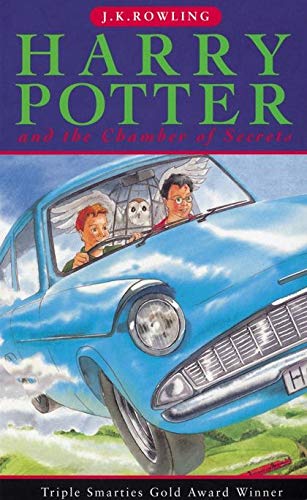 Harry can't wait for his holidays with the dire Dursleys to end. But a small, self-punishing house-elf warns Harry of mortal danger awaiting him at Hogwarts School. Returning to the castle nevertheless, Harry hears a rumour about a chamber of secrets, holding unknown horrors to magicians of Muggle parentage. Now someone is casting spells that turn people to stone, and a terrible warning is found painted on the wall. The chief suspect - who's always in the wrong place - is Harry. But something much darker has yet to be unleashed.

J K Rowling's sequel to Harry Potter and the Philosopher's Stone carries on where the original left off. Harry is returning to Hogwarts School of Witchcraft and Wizardry after the summer holidays and, right from the start, things are not straightforward.

Unable to board the Hogwarts express, Harry and his friends break all the rules and make their way to the school in a magical flying car. From this point on, incredible events happen to Harry and his friends--Harry hears evil voices and someone, or something is attacking the pupils. Can Harry get to the bottom of the mystery before it's too late?

As with its predecessor Harry Potter and the Chamber of Secrets is a highly readable and imaginative adventure story with real, fallible, characters, plenty of humour and, of course, loads of magic and spells. There is no need to have read Harry Potter and the Philosopher's Stone to enjoy this book. However, if you have read it, this is the book you have been waiting for. (Ages 9 to Adult). --Philippa Reece

'The most remarkable publishing sensation for a generation ... the story is told with such momentum, imagination and irrepressible humour that it can captivate both adults and children' Sunday Express 'The Harry Potter books are that rare thing, a series of stories adored by parents and children alike' Daily Telegraph 'Harry Potter and the Chamber of Secrets is as good as its predecessor ... Hogwarts is a creation of genius' TLS 'Joanne Rowling's second book is just as funny, frightening and unexpected as her first' Daily Mail