Items related to The Magician's Wife 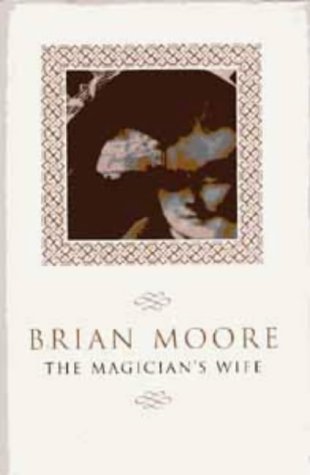 215 pages. Book appears to have hardly been read and is in As new condition throughout. Set In France And Algeria.

Brian Moore is best known for his mysteries of faith and fanaticism. The Statement focuses on a murderously unrepentant Vichy collaborator whom the French Catholic church has long sheltered. And in The Colour of Blood--set in an unnamed Iron Curtain country--a cardinal wonders if people aren't using religion "as a sort of politics". Religion and politics again feature in The Magician's Wife, but this time they are accompanied by their long-time companion, illusion. Once again, France is the setting--Second Empire France, though, along with its prospective colony, Algeria.

Moore opens the novel with a bizarre detail. It is 1856 and Emmeline Lambert watches a mechanical gatekeeper salute a departing dignitary. This nuts-and-bolts major-domo is the creation of her autocratic husband, Henri, formerly France's greatest magician, retired and hard at work on such minor contrivances. "Now he was an inventor, a scientist," Emmeline thinks. "But would a real scientist spend his days making mechanical marionettes?" Her impatience with his compulsive tinkering is only one part of a troubled marriage, which seems to consist largely of fossilized accommodations and painful discretion.

According to their visiting dignitary, however, the prestidigitator's country needs him. Colonel Deniau, head of Arab affairs and in many ways the real magician of the tale--or the magician's enchanter--has a mysterious project in mind. The plan is to flatter Henri into creating a series of mind-blowing tricks. According to the colonel, an Algerian marabout, or living saint, is "said to possess miraculous powers" and might call for a holy war. If Henri outperforms the Algerian, he will seem the greater marabout "and convince them that God is not on their side but France's."

The Magician's Wife is a condemnation of colonialism, of which illusion is always a key ingredient. Moore's novel, however, is far from a tract: he infuses his drama of the past with our present anxiety. He also creates, quite literally, a magical narrative. Though the Algerians may consider Henri the devil incarnate, and his wife may slight his legerdemain, you will be awed by his fantastic skills and the apparent effortlessness with which the author relates them.

'A tour de force, Moore has left no seams between reality and fiction. Flashing his own sleight of hand, he transforms historical fact into a story both true to its time and relevant to the present day' (New York Times)

'Combines the pleasure of a thriller with a novel that considers questions of morality and politics, ambition and conscience, the lure of illusion and the magic of truth' (People)

'Moore is a magician' (LA Times)