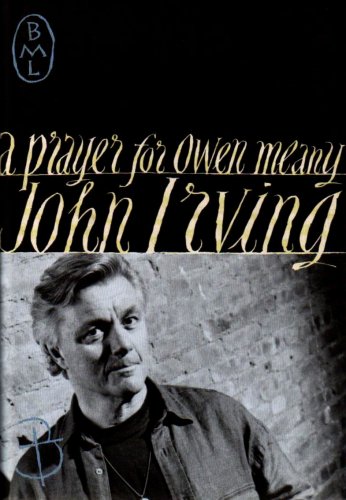 Eleven-year-old Owen Meany, playing a Little League baseball game in New Hampshire in 1953, hits a foul ball and kills his best friend's mother. Owen does not believe in accidents and is convinced he is God's instrument. What happens to Owen after that is both extraordinary and terrifying.

Owen Meany is a dwarfish boy with a strange voice who accidentally kills his best friend's mum with a baseball and believes--correctly, it transpires--that he is an instrument of God, to be redeemed by martyrdom. John Irving's novel, which inspired the 1998 Jim Carrey movie Simon Birch, is his most popular book in Britain, and perhaps the oddest Christian mystic novel since Flannery O'Connor's work. Irving fans will find much that is familiar: the New England prep-school-town setting, symbolic amputations of man and beast, the Garp-like unknown father of the narrator (Owen's orphaned best friend), the rough comedy. The scene of doltish Dr Dolder, Owen's shrink, drunkenly driving his VW down the school's marble steps is a marvellous set piece. So are the Christmas pageants Owen stars in. But it's all, as Highlights magazine used to put it, "fun with a purpose". When Owen plays baby Jesus in the pageants, and glimpses a tombstone with his death date while enacting A Christmas Carol, the slapstick doesn't change the fact that he was born to be martyred. The book's countless subplots add up to a moral argument, specifically an indictment of American foreign policy--from Vietnam to the Contras.

'May justly join the classic American list' Anthony Burgess, Observer 'So extraordinary, so original, and so enriching' Stephen King, Washington Post 'I believe it to be a work of genius some of the most fascinating prose written in fiction today' Jan Morris, Independent 'Intelligent, exhilarating and darkly comic Dickensian in scope Quite stunning' Los Angeles Times

Book Description Bloomsbury Publishing PLC, 1994. Hardcover. Condition: Good. Connecting readers with great books since 1972. Used books may not include companion materials, some shelf wear, may contain highlighting/notes, may not include cdrom or access codes. Customer service is our top priority!. Seller Inventory # S_281422672

Book Description Paperback. Condition: Very Good. The book has been read, but is in excellent condition. Pages are intact and not marred by notes or highlighting. The spine remains undamaged. Seller Inventory # GOR002048274

Book Description Paperback. Condition: Very Good. The book has been read, but is in excellent condition. Pages are intact and not marred by notes or highlighting. The spine remains undamaged. Seller Inventory # CIN000388024