Items related to Close to Shore 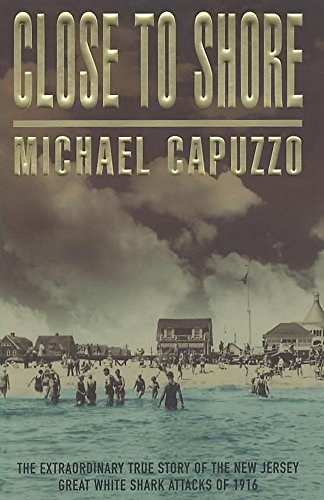 As the idle rich thronged the palatial hotels of the Jersey Shore in the summer of 1916, America was at its most self-confident. But the world's first industrial superpower was about to receive a series of terrifying shocks. Sharks, it was believed, were simply not man-eaters, so when a lone Great White shark, driven inshore by freak climatic conditions, began to develop a taste for human flesh, America went into total denial. Only after the most horrific attacks was the truth admitted - and an unprecedented national frenzy forced President Woodrow Wilson to mobilize the US Navy in an attempt to put nature back in its place. Combining biology, history and adventure, this is the first book on the events that pitted 20th-century technology against an ancient, mythic enemy and became the model for Peter Benchley's Jaws.

In Close to Shore Michael Capuzzo tells the harrowing story of the real-life Jaws that helped inspire Peter Benchley's classic novel (and movie). Modern science now tells us that shark attacks are exceedingly rare and limited to just a few species. Yet they do occur, and one of the most terrifying episodes of fatal attacks occurred near the New Jersey shore in 1916, when a renegade great white shark went on a man-eating spree, which left three adults and one boy dead. Capuzzo likens the shark's abnormal behaviour to that of a person "who goes off the deep end and starts shooting". Whatever its motives, the shark captivated the public's imagination along the Eastern seaboard, devastated the resort economy, and even drew the attention of President Woodrow Wilson.

Close to Shore is a little slow to get going and could have been a much shorter book. There is a fair amount of stage setting, and the first shark attack doesn't occur until about one-third of the way through the narrative. But Capuzzo does much with limited source material and includes many interesting asides on everything from the lore of sea monsters to the bathing-suit fashions of the day to nearly everything science knows about great whites, which, it turns out, is surprisingly little. Alternating from the victims' perspectives to the shark's, Capuzzo's descriptions of the attacks are a blend of horrors and thrills:

Charles Bruder felt a slight vacuum tug in the motion of the sea, noted it as a passing current, the pull of a wave, the tickle of undertow. He could not have heard the faint, sucking rush of water not far beneath him. He couldn't have seen or heard what was hurtling from the murk at astonishing speed, jaws unhinging, widening, for the enormous first bite. It was the classic attack that no other creature in nature could make--a bomb from the depths.

If this book were on any other subject, it would make for good beach reading. --John J Miller Review:

Meticulously researched, beautifully written. This is strong stuff - Mark Bowden, author of Black Hawk Down and Killing Capuzzo is a masterly writer and his book is every bit as gripping as a thrilling novel - Glasgow Herald Close to Shore tells an amazing, shocking true story - Mail on Sunday This book is quite a performance - Sunday Telegraph