Items related to The Floating Brothel: The Extraordinary True Story...

Rees, Sian The Floating Brothel: The Extraordinary True Story of an Eighteenth-century Ship and Its Cargo of Female Convicts

The Floating Brothel: The Extraordinary True Story of an Eighteenth-century Ship and Its Cargo of Female Convicts 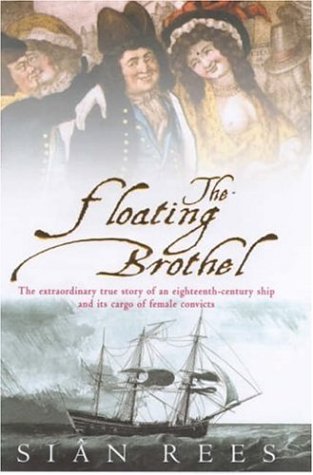 In July 1789, 237 women convicts left England for Botany Bay in Australia on board a ship called The Lady Julian, destined to provide sexual services and a breeding bank for the men already there. This is the enthralling story of the women, their voyage and life in eighteenth-century Australia. Based on painstaking research into contemporary sources such as trial records - most of the convicts were prostitutes or petty thieves - and the first-hand account of the voyage written by the ship's steward, John Nicol, who fell in love with the convict Sarah Whitelam, this is a riveting work of recovered history in the bestselling tradition of IN THE HEART OF THE SEA and THE FATAL SHORE.

"Winter 1788, London. Outside the royal stables, at the bottom of the Mall ... a 26-year-old Scottish prostitute staked out her space and began her night's work": so begins Sian Rees's fascinating history of the 200-odd women convicts--"disorderly girls"--who, at the very end of the 1780s, found themselves condemned to Transportation to Parts Beyond the Seas. The Floating Brothel is a compelling and readable account of that moment in penal history when transportation from England to the colonies (in this case, New South Wales) was a commonplace alternative to the death sentence. Taking her readers into the squalor of Newgate Prison, and the arcane injustices of the Old Bailey, Rees follows the traces of these women's lives--lives marked by obscurity, loneliness and exploitation as well as the shoddy glamour of 18th-century London. In particular, Rees's account of life on board the Lady Julian--the ship that takes this band of convicts and crew across the world--paints a vivid picture of the complex relations between women destined to become colony "wives" (sexual comforters, breeding banks) and the men charged with delivering this special cargo. "As soon as they were at sea", Rees quotes one of her primary sources, John Nicol, "every man on board took a wife from among the convicts, they nothing loath". One of the strengths of Rees's approach is her refusal to evaluate 18th-century sex and sensibility in terms of modern consciousness. Nevertheless, the everyday trials and passions of her protagonists--notably, the experience of pregnancy and labour on board a convict vessel--comes through this remarkable testimony to forgotten lives. --Vicky Lebeau

'Rees's meticulous research pays huge dividends...The account will be of interest to those who enjoy a rich vein of social and colonial history...Others will just enjoy the tale of bravery and human resilience' (Bookseller )

'a vivid, visceral and riveting account... Siân Rees wears her learning lightly and there is not a dull moment in what is, paradoxically, a wonderfully earthy read' (Guardian )

'Rees has produced a book which is simultaneously shocking and utterly engrossing....This wonderfully vivid book, beautifully written and all the more enthralling for being historically accurate, will stay in my mind for many months' (Daily Mail )

'They (girls on the Lady Julian) are luckier still to have their story told so tautly by Rees, whose first book is a miracle of compressed intelligence'. (Times )

'Sian Rees paints a vivid picture...For a first-time author this book is quite an achievement, and it is to be highly recommended for its freshness and vigour' (Literary Review )

'Rees gives a voice to a group of illiterate, all-but-anonymous women who left no other record of themselves, and whose resilience and warmth in turn enrich a book that brings the ship herself to life as vividly as her human cargo' (Daily Telegraph )

The Floating Brothel: The Extraordinary True Story of an Eighteenth-century Ship and Its Cargo of Female Convicts

The Floating Brothel: The Extraordinary True Story of an Eighteenth-century Ship and Its Cargo of Female Convicts Rees, Sian