Items related to The Soul Slayer: A terrifying tale of Elizabethan suspense... 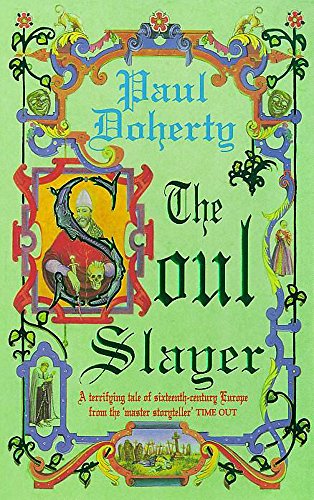 In medieval folk lore, if a warlock can take out the heart of his victim before death, and the victim does not die in a state of grace, the warlock can call upon that soul to do his bidding.

In 1562, Queen Elizabeth has been on the throne for four years and the Protestant faith has been reaffirmed. In the village of Dunmow, eighteen-year-old Rebecca Lennox is neglected and feared by the other villagers, who regard her as cursed, by both her hare lip and her gift of second sight. Rebecca is constantly attracted to her old parish church, often going to pray there and talk to the statue of St Michael the Archangel. When a young Catholic priest, Michael St Clair, comes into the village in disguise, Rebecca is much taken by him; he is not repelled by her infirmity and his charm and gentleness remind her of her beloved statue. But Michael is not the only stranger who will change Rebecca's quiet life forever.

A terrifying tale of Elizabethan suspense from a master storyteller

Paul Doherty was born in Middlesbrough. He studied History at Liverpool and Oxford Universities and obtained a doctorate for his thesis on Edward II and Queen Isabella. He is now headmaster of a school in north-east London and lives with his family in Essex.