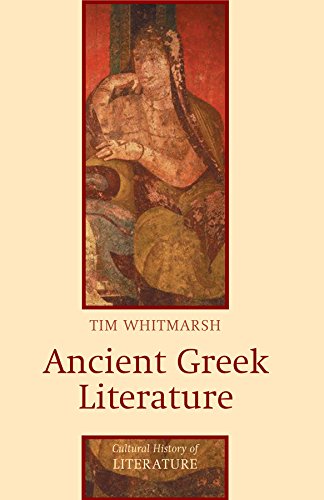 This book offers an innovative new introduction to ancient Greek literature. The volume integrates cutting-edge cultural theory with the latest research in classical scholarship, providing a comprehensive, sophisticated and accessible account of literature from Homer to late antiquity.

"The book is indeed cutting edge or on the forefront of Greek literature studies and, as such, it is representative of the classics tripos at Cambridge University ... Ancient Greek Literature is an intelligent and stimulating book for undergraduates and also for scholars, who sometimes need to see again the forest for the trees. TW puts his finger nicely on the issues that matter in reading Greek literature and succeeds well in presenting this huge corpus of material succinctly in around two hundred pages. This is a precise and excellent presentation that will enrich any undergraduate's course of study in Greek writing."
Bryn Mawr Classical Review

"We have long needed an up-to-date survey of Greek literature as an expression of Greek culture, and Whitmarsh has provided us with an outstanding introduction. He covers a wide range of texts, and employs the latest methods of literary and cultural analysis. His mastery of these approaches is apparent on every page, as he elegantly discusses questions of class, gender, the public versus the private sphere, oral versus written traditions, and much else."
David Konstan, Brown University

"Ancient Greek Literature is a scintillating discussion of the central issues and themes that cluster around literary texts. Whitmarsh's own literary style is aptly pungent, witty and probing, and his focus on texts as battlegrounds of power relationships or sites of social dispute will surely prove as provocative and challenging as it is intended to be. Among his many other original findings is his notion of the "archive": that is, the creation, from the fifth century BCE onwards, of a defined body of texts and set of institutions devoted to fostering the Greeks? sense of literature's central place in defining their identity. The chronological discussion is complemented by four thematic chapters that systematically explore the topics of cultural identity, the place allocated to women, gender issues and images of the subordinated classes of the poor and unfree."
Paul Cartledge, University of Cambridge

In this book, Tim Whitmarsh offers an innovative new introduction to ancient Greek literature. The volume integrates cutting-edge cultural theory with the latest research in classical scholarship, providing a comprehensive, sophisticated and accessible account of literature from Homer to late antiquity. Whitmarsh offers new readings of some of the best-known and most influential authors of Greek antiquity, including Sophocles, Euripides, Herodotus, Aristophanes and Plato, as well as introducing many lesser-known figures. Unlike conventional narrative histories, this volume focuses on the profound effects of literature within Greek society.Whitmarsh shows that literature, distributed via a range of social institutions, such as festivals, theatres, symposia and book production, played an important role in the legitimization - and challenging - of ideologies of gender, class and cultural identity. The volume also addresses the legacy of Greek literature: how the Victorian cult of Hellenism and its successors have structured the reception of ancient texts, and how and why the modern West has adopted the Greeks as its ancestors.