Items related to The Good Old Cause

Thompson, Willie The Good Old Cause

The Good Old Cause 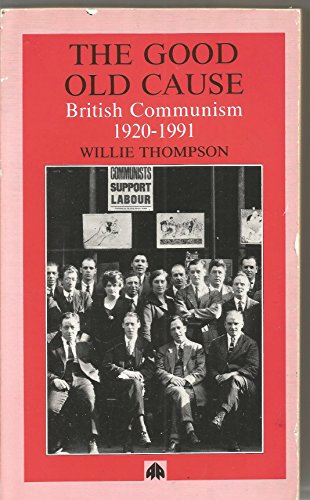 Willie Thompson, a longstanding Communist Party of Great Britain (CPGB) member and activist, has written this book to show the history of the Communist Party, from its formation to its present crisis of identity. The character and methods of the Party are explored in detail, from the Russian Revolution through the "popular front" of the 1930s, the heyday of the war period to Socialism to the crisis of 1956, disintegration, loss of industrial base and near collapse in the 1970s and 1980s. The dual nature of the infant CPGB - as an expression both of the international revolutionary wave and the specific crisis of British state and society - is interpreted as the central contradiction at the heart of the Party's subsequent career.

Willie Thompson was until his retirement Professor of Contemporary History at Glasgow Caledonian University. His books, published by Pluto, include The Good Old Cause: British Communism 1920-1991 (1992), What Happened to History? (2000) and Ideologies in the Age of Extremes: Liberalism, Conservatism, Communism, Fascism 1914-91 (2011). He is currently vice-president of the Socialist History Society.

2. The Good Old Cause

Book Description Pluto Press, 1992. Condition: Good. A+ Customer service! Satisfaction Guaranteed! Book is in Used-Good condition. Pages and cover are clean and intact. Used items may not include supplementary materials such as CDs or access codes. May show signs of minor shelf wear and contain limited notes and highlighting. Seller Inventory # 0745305792-2-4

Book Description Pluto Press, 1992. Condition: Good. 1st. Ships from the UK. Former Library book. Shows some signs of wear, and may have some markings on the inside. Seller Inventory # GRP83382969

Book Description Pluto Press, United Kingdom & USA, 1992. Paperback. Condition: Good. 258 pages. The cover is a little worn and creased. The page edges are well tanned. Due to the disruption to international deliveries as a result of COVID-19 we are currently only posting items WITHIN AUSTRALIA. Size: Size E: 8"-9" Tall (203-228mm). Seller Inventory # 22445