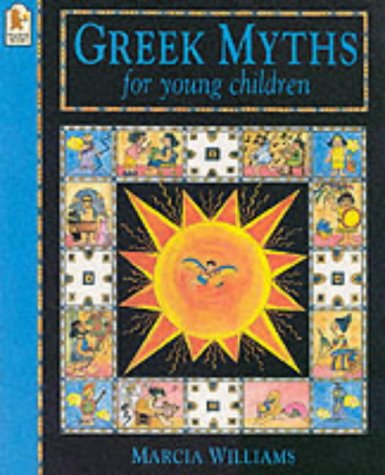 In this book you'll find eight favourite myths - the stories of Theseus, conqueror of the dreaded Minotaur; the mighty Heracles and his twelve tasks; the tragic lovers, Orpheus and Eurydice; Perseus, the Gorgon-slayer; the musician Arion and his rescue by the dolphins; Pandora and her little box of horrors; the feather-clad fliers, Daedalus and Icarus; and the weaving contest between Ariachne and the goddess Athene. Each of these tales has been retold in lively words and illustrated in dramatic cartoon style to make them accessible to children. Marcia Williams' is the author/illustrator of several picture books, including the retellings "The Amazing Story of Noah's Ark"; "Jonah and the Whale"; "Joseph and His Magnificent Coat of Many Colours"; "Don Quixote" and "Sinbad the Sailor", as well as her own texts "When I Was Little" and "Not a Worry in the World".

Williams is one of our very best retellers of the classics. * The Independent on Sunday * Crammed with hilarious, minutely detailed strip drawing. Smashing. * The Guardian * Terrific ... irresistibly entertaining. * The Daily Telegraph * I defy anybody not to laugh out loud ... It's also uncannily accurate. * Books for Your Children * Eight legends retold with pith and punch ... The strip-cartoon style makes the stories feel new. * The Independent on Sunday * Featured/recommended in Greece article * Travel for Kids *

Marcia Williams is a successful author and illustrator and, with her distinctive cartoon-strip style, has now illustrated and retold many literary classics for children, including The Iliad and the Odyssey and Mr William Shakespeare's Plays. Marcia lives in Barnes, London.