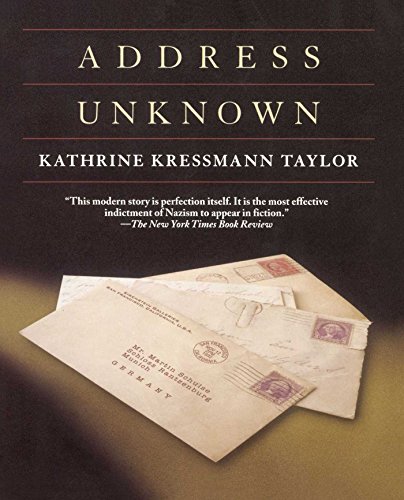 Address Unknown Dramatizes the Nazi persecution of the Jews in 1938 through a series of letters between an American-Jewish art dealer in San Francisco and his German friend. Full description

Star Tribune (Minneapolis) The story is akin to the sly plot twists of O. Henry. Believe me, Address Unknown will leave you breathless with admiration.

Kathrine Kressmann Taylor (1903-1996) was an undiscovered writer before the 1938 publication of Address Unknown. She won her first writing award at age eleven, and with the prize money bought herself a set of The Book of Knowledge. Taylor went on to write three books and more than a dozen short stories, one of which was included in The Best American Short Stories of 1956. For nineteen years, she was a professor of creative writing and journalism at Gettysburg College in Pennsylvania, where she was the first woman to earn tenure.