Items related to Born Under Punches 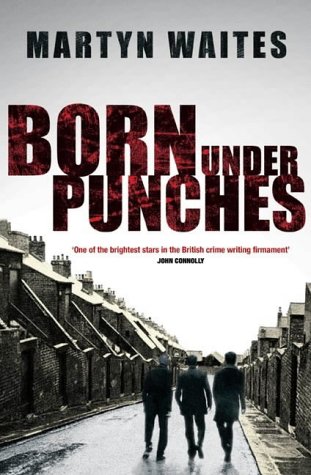 A gritty crime thriller from the crown prince of 'Brit noir', centred around the 1984 miners' strike. The action takes place in a depressed mining town in the North East. Switching continuously between 1984 and the present day, the plot follows the intertwined lives of a small group of characters, all linked in various ways to the miners' strike: Tony Woodhouse, a professional footballer who can't escape his shady past; Tommy Jobson, cruising the streets of Newcastle, violently collecting debts, about to be sucked into something far more dangerous; Mick Hutton, a striking miner, increasingly desperate to find ways to support his wife and growing family; Stephen Larkin, an idealistic young journalist, determined to expose the truth about the strike - as he sees it; Stephen's sister, Louise, in love with Tony Woodhouse, stalked by a shadowy figure from her past. As the lives of these five characters unfold, it becomes clear the strike will have devastating repercussions - not only for those directly involved, but for future generations too.

Born and raised in Newcastle-upon-Tyne, Martyn Waites now lives in Essex with his wife and two children. He has turned his hand to many professions: market trader, bar manager, stand-up comic and professional actor, a career he now combines with writing. Most recent TV appearances include a benefit fraud advertisement and The New Adventures of Robin Hood on Channel 5! Martyn is Writer in Residence at Huntercombe Young Offenders' Institution in Oxfordshire. BORN UNDER PUNCHES is his fourth novel.

Book Description Simon and Schuster Ltd, 2003. Paperback. Condition: Used; Good. Dispatched, from the UK, within 48 hours of ordering. This book is in good condition but will show signs of previous ownership. Please expect some creasing to the spine and/or minor damage to the cover. Aged book. Tanned pages and age spots, however, this will not interfere with reading. Seller Inventory # CHL5482517

Book Description Simon and Schuster Ltd, 2003. Paperback. Condition: Used; Good. **Simply Brit** Shipped with Premium postal service within 24 hours from the UK with impressive delivery time. We have dispatched from our book depository; items of good condition to over ten million satisfied customers worldwide. We are committed to providing you with reliable and efficient service at all times. Seller Inventory # 1819366

Book Description Paperback. Condition: Fair. A readable copy of the book which may include some defects such as highlighting and notes. Cover and pages may be creased and show discolouration. Seller Inventory # GOR003751736

Book Description Paperback. Condition: Very Good. The book has been read, but is in excellent condition. Pages are intact and not marred by notes or highlighting. The spine remains undamaged. Seller Inventory # GOR003708293

Book Description Simon & Schuster Ltd, 2003. Paperback. Condition: Good. Good condition, large score mark to rear cover otherwise Very Good. This book is in stock now, in our UK premises. Photos of most of our books are available - please ask, as dustjacket and cover illustrations vary, and unless the accompanying image is marked 'Bookseller Image', it is an Abebooks Stock Image, NOT our own. Overseas buyers also note that shipping rates apply to packets of 750g and under, and should the packed weight of an item exceed this we reserve the right to ship via 'Economy', or request extra postage prior to fulfilling the order, or cancel. Seller Inventory # mon0000104250