Items related to Picking Wedlock: Women and the Courtship Novel in Spain

Picking Wedlock: Women and the Courtship Novel in Spain 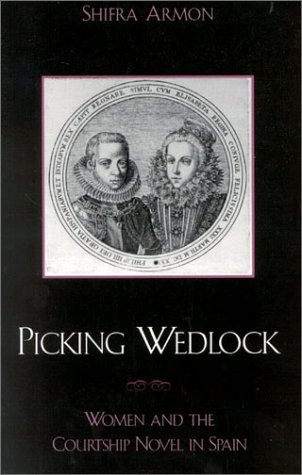 In Picking Wedlock, Shifra Armon illuminates the remarkable convergence of three women novelists of Spain's Golden Age: Maria de Zayas, Mariana de Carvahal, and Leonor de Meneses. Armon considers these extraordinary writers together for the first time, appraising them in relationship to the historical and literary nexus that gave impetus to the publication of their work.

Shifra Armon's study is an engaging and well-informed analysis of the reasons why early modern Spanish women writers chose to write in the genre she baptizes the 'courtship novel,' which she sees as women's equivalent to male-authored courtesy literature. Grounding her analysis in a meaty and concise historical survey of aristocratic marriage practices, she argues that these novels offer a better window on women's lived experience than the normative precept literature; the tales show women exercising agency even in the absence of legitimized authority. Furthermore, Armon suggests that these previously deprecated works can be read as subtle romans a clef that engage with the crucial political question of royal marriages and political alliances in Hapsburg Spain. -- Margaret R. Greer, Duke University Picking Wedlock is a significant and original contribution to Hispanic scholarship and feminist literary studies, written in lively, highly accessible language. Professor Armon's analysis of these three women writers' works addresses key issues in feminist history and literary theory without imposting twentieth-century values and social practices on these seventeenth-century texts. Picking Wedlock addresses the need for a comprehensive and theoretically informed approach to the contribution of women writers to the development of the novel. This is a valuable study of an undervalued literary genre and its relationship to the representation of gender in the early modern period. -- Emilie L. Bergmann, University of California, Berkeley

In eras where women's roles were heavliy circumscribed, fictions about courtship and wedlock granted women writers an unassailable framework through which they contested orthodox beliefs about their place in society. In this guide, the author illuminates the remarkable convergence of three women novelists of Spain's Golden Age: Maria de Zayas, Mariana de Carvahal and Leonor de Meneses. These writers are considered together, apparasing them in relationship to the historical and literary nexus that gave impetus to the publication of their work. Neither silent nor powerless nor choiceless, these women asserted their alternative story of female subjectivity via a cast of characters whose narrative adventures belied the prevalent ideal of the "perfecta casada" or "perfect wife". Moreover, the stock courtship plot offered an ideal allegorical screen for critizing the diplomatic courtship scenarios upon which Spain depended for dynastic renewal. In the parallel universe of their fictions, Zayas, Carvahal and Meneses projected their preferred solutions to the succession crisis that threatened to unseat the Spanish Habsburgs from 1644 to 1700.

1. Picking Wedlock: Women and the Courtship Novel in Spain

2. Picking Wedlock: Women and the Courtship Novel in Spain