Items related to The Legends of Tono: 100th Anniversary Edition 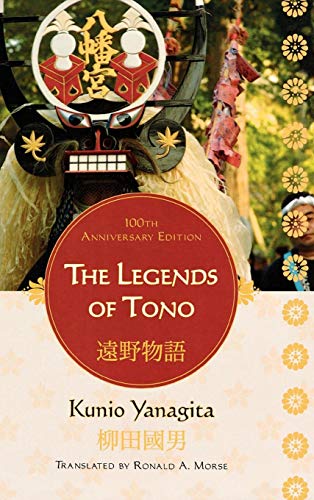 This is an exciting new book that for the first time combines rich biographical information on the founder of Japanese folklore studies, Kunio Yanagita, with a superb updated translation of his literary classic, The Legends of Tono (1910). This marvelous translation of a Japanese literary and folklore classic, reflecting thirty-five years of research and scholarship, is filled with enthralling tales that bring alive Japan's rich traditional heritage.

The various episodes selected from the countless field notes Yanagita took provide, from a literary point of view, a peerless model of conciseness. In his sentences can be found a perfect economy, his words used as sparingly as gold.--Yukio Mishima

There is magic on every page of Yanagita's 'Legends, ' and it's very hard not to be seduced by this reissued, 100th anniversary translation.... This handsome new edition updates Morse's excellent but rare 1975 translation with a new preface and introduction.... It's a must-have for everyone who wants to know what the psycho-spiritual lives of rural Japanese were like a century ago. Tono stands proud as Japan's heart of darkness, and Yanagita is its best guide.--Tim Hornyak, 2009 "The Japan Times "

That is the wonder of the Tono book. We are looking at tales in the making. Yanagita gives us a rare glimpse of story-telling as process, rather than product.--A. W. Sadler

The Tono monogatari takes its place with the Kinder und Haus-Märchen of the brothers Grimm as a landmark collection in the history of folklore studies...In making The Legends of Tono available in English translation Ronald Morse, the perceptive biographer of Yanagita-sensei, has placed Asian and folklore scholars in his debt. It deserves a wide attentive audience outside its own country to match the readership it has rightfully earned at home.--Richard M. Dorson

The stories themselves are a collage of disparate elements coming together to create an overall feel of the area. It creates a real sense of place and time and feeling.--Sci-Fi Japan, April 2010

Ronald A. Morse is a leading thinker and commentator on Japan.

1. The Legends of Tono (Hardback)

Book Description Lexington Books, United States, 2008. Hardback. Condition: New. 100th Anniversary Edition. Language: English. Brand new Book. In 1910, when Kunio Yanagita (1875-1962) wrote and published The Legends of Tono in Japanese, he had no idea that 100 years later, his book would become a Japanese literary and folklore classic. Yanagita is best remembered as the founder of Japanese folklore studies, and Ronald Morse transcends time to bring the reader a marvelous guide to Tono, Yanagita, and his enthralling tales. In this 100th Anniversary edition, Morse has completely revised his original translation, now out of print for over three decades. Retaining the original's great understanding of Japanese language, history, and lore, this new edition will make the classic collection available to new generations of readers. Seller Inventory # LHB9780739127674

2. The Legends of Tono

3. The Legends of Tono

4. The Legends of Tono

5. The Legends of Tono

6. The Legends of Tono

7. The Legends of Tono

9. The Legends of Tono