Items related to This is Sadie 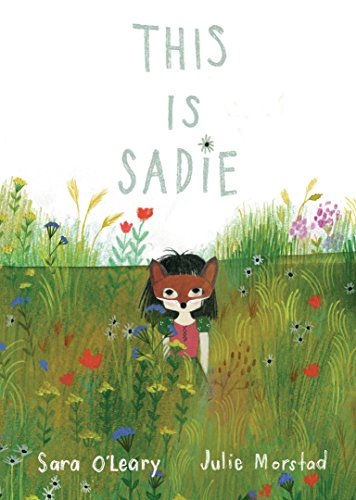 Sadie is a little girl with a big imagination. She has been a girl who lived under the sea and a boy raised by wolves. She whispers to the dresses in her closet and talks to birds in the treetops. She has wings that take her anywhere she wants to go, but that always bring her home again. She likes to make things - boats out of boxes and castles out of cushions. But more than anything Sadie likes stories, because you can make them from nothing at all. For Sadie, the world is so full of wonderful possibilities... This is Sadie, and this is her story.

"As in previous collaborations like When You Were Small and Where You Came From, O'Leary and Morstad put forth a playful, imagination-first portrait of childhood, introducing a girl named Sadie who is equally at home in the expanses of her mind as she is in the outside world." - Publishers Weekly "This award-winning duo beautifully convey the magic that is to be found in reading or listening to a story. The appealing text is accompanied by lush drawings rendered in gouache, ink, and Photoshop that lend it a fanciful feel in the best way possible. With its leisurely pace and verdant illustrations, this book is a delight for bedtime as well as an excellent storytime choice paired with Crockett Johnson's Harold and the Purple Crayon and Peter Bently's King Jack and the Dragon ...." - Starred Review, School Library Journal "Morstad's soft-palette illustrations engage perfectly with O'leary's text creating a whimsical kid-centred picture book that will be enjoyed by both children and adults. With something new to discover upon each encounter, This is Sadie is sure to become a favourite bedtime read." - Starred Review, Quill and Quire "In Morstad's quietly delightful gouache and watercolor illustrations, black-haired Sadie looks both delicate and strong, pretty and at times androgynous. She's a mermaid and "a boy raised by wolves," howling at the moon; she carefully chooses dresses and artfully hammers nails into wood. It's an appealingly rounded glimpse of girlhood that's somehow both timeless and modern." - The New York Times "[A] ... tender and playful ode to make believe.... Sadie is never the same person for more than two pages, preferring instead to inhabit different characters, often inspired by the books she reads. Every moment of the day is a new opportunity to slip into a new role. Sadie isn't going through an identity crisis; she just wants to explore every possibility of being."
--National Post About the Author:

JULIE MORSTAD is an author, illustrator and artist living in Vancouver, BC. Her book How To marked her authorial debut, and received starred reviews in Kirkus, School Library Journal and Quill & Quire, was a Governor General's Award nominee, and won the Marilyn Baillie Picture Book Award. She is also the illustrator of When You Were Small, recipient of the Marilyn Baillie Picture Book Award; When I Was Small, winner of the Christie Harris Illustrated Children's Literature Prize; Swan: The Life and Dance of Anna Pavlova; Today; and When Green Becomes Tomatoes, which has recieved numerous starred reviews.

SARA O'LEARY is a writer of fiction for both adults and children. She is the author of the award-winning series of Henry books: When You Were Small, Where You Came From and When I Was Small, all illustrated by Julie Morstad. A graduate of the UBC Creative Writing Program, she has taught screenwriting and writing for children at Concordia University in Montreal. Sara was named for a grandmother who was called Sadie all her life. She is happy to have a child to name after her.

This is Sadie Board book

This Is Sadie (Board book)

Book Description Board book. Condition: New. Morstad, Julie (illustrator). Language: English. Brand new Book. Now in board book, the beloved story about a little girl with a big imagination from the award-winning team of Sara O'Leary and Julie Morstad. Sadie is a little girl with a big imagination. She has been a girl who lived underthe sea and a boy raised by wolves. She has had adventures in wonderland andvisited the world of fairytales. She whispers to the dresses in her closet and talksto birds in the treetops. She has wings that take her anywhere she wants to go, butthat always bring her home again. She likes to make things -- boats out of boxesand castles out of cushions. But more than anything Sadie likes stories, becauseyou can make them from nothing at all. For Sadie, the world is so full of wonderfulpossibilities . . . This is Sadie, and this is her story. Seller Inventory # AAT9780735263246

This Is Sadie (Board Book)