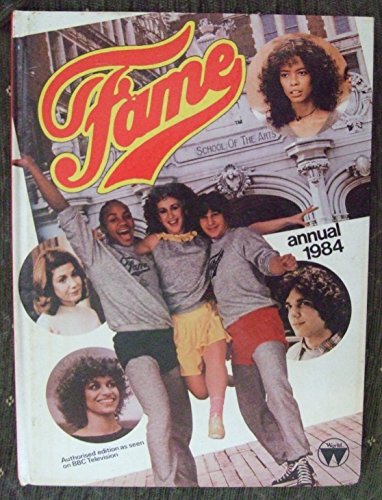 This is the 1984 annual of the Fame TV series, an American television series originally produced between 1982 and 1987. The show is based on the 1980 motion picture of the same name. Using a mixture of drama and music, it followed the lives of the students and faculty at the fictional New York City High School for the Performing Arts. Although fictional, it was based heavily on the actual Fiorello H. LaGuardia High School of Music & Art and Performing Arts. This album features lots of stories and items about the stars of the show such as Lee Curreri (Bruno Martelli), Erica Gimpel (Coco Hernandez), Debbie Allen (Lydia Grant), etc.

Book Description WORLD DISTRIBUTORS LTD, 1983. Hardcover. Condition: Used; Good. Dispatched, from the UK, within 48 hours of ordering. This book is in good condition but will show signs of previous ownership. Please expect some creasing to the spine and/or minor damage to the cover. Aged book. Tanned pages and age spots, however, this will not interfere with reading. Seller Inventory # CHL5140487

Book Description Paperback. Condition: Very Good. The book has been read, but is in excellent condition. Pages are intact and not marred by notes or highlighting. The spine remains undamaged. Seller Inventory # GOR003030683

Book Description World International. Hardcover. Condition: Good. No Jacket. A copy that has been read, but remains in clean condition. All pages are intact, and the cover is intact. The spine may show signs of wear. Pages can include limited notes and highlighting, and the copy can include previous owner inscriptions. At ThriftBooks, our motto is: Read More, Spend Less. Seller Inventory # G0723566836I3N00

Book Description World Distributors Ltd, 1984. Hardcover. Condition: Used; Good. **Simply Brit** Shipped with Premium postal service within 24 hours from the UK with impressive delivery time. We have dispatched from our book depository; items of good condition to over ten million satisfied customers worldwide. We are committed to providing you with reliable and efficient service at all times. Seller Inventory # mon0001589671

Book Description WORLD DISTRIBUTORS LTD, 1984. Hardcover. Condition: Used; Good. **SHIPPED FROM UK** We believe you will be completely satisfied with our quick and reliable service. All orders are dispatched as swiftly as possible! Buy with confidence! Aloysius Ihezie. Seller Inventory # mon0002177693

Book Description World Distributors Ltd, Manchester, 1983. Hard Cover. Condition: Very Good (+). No marks or inscriptions. No creasing to covers or to spine. A very clean very tight copy with bright unmarked boards and a little bumping to rear corners. 63pp. Annual based on the BBC TV series of youngsters who attend the drama and dance school set in New York. We do not use stock photos, the picture displayed is of the actual book for sale. Every one of our books is in stock in the UK ready for immediate delivery. Size: 10.75 x 8 inches. Seller Inventory # 017323