Items related to Escape from Sobibor 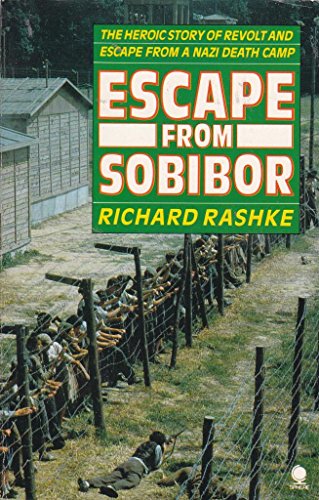 Revised and Updated "Brilliantly reconstructs the degradation and drama of Sobibor . . . A memorable and moving saga, full of anger and anguish, a reminder never to forget" -San Francisco Chronicle On October 14, 1943, six hundred Jews imprisoned in Sobibor, a secret Nazi death camp in eastern Poland, revolted. They killed a dozen SS officers and guards, trampled the barbed wire fences, and raced across an open field filled with anti-tank mines. Against all odds, more than three hundred made it safely into the woods. Fifty of those men and women managed to survive the rest of the war. In this edition of Escape from Sobibor, fully updated in 2012, Richard Rashke tells their stories, based on his interviews with eighteen of the survivors. It vividly describes the biggest prisoner escape of World War II. A story of unimaginable cruelty. A story of courage and a fierce desire to live and to tell the world what truly went on behind those barbed wire fences.

“A sensitive, thoughtful, and well-researched account of the ‘biggest prisoner escape of World War II.’” —Samuel Gold, Jewish Chicago
“A journalistic account in the tradition of Truman Capote’s In Cold Blood.” —Choice

“The authoritative version of the breakout from the Nazi experimentation camp at Sobibor. . . . Gives us a very good idea of how the will to survive can lead quite ordinary people to surmount the most extraordinary obstacles.” —The Jerusalem Post

“This moving and angry book deserves to be read.” —The Washington Post

Poignant in its honesty and grim in its details, Escape from Sobibor offers stunning proof of resistance - in this case successful - by victims of the Holocaust. The smallest of the extermination camps operated by Nazi Germany during World War II, Sobibor also was the scene of the war's biggest prisoner escape. Richard Rashke's interviews with eighteen of those who survived provide the foundation for this volume. He also draws on books, articles, and diaries to make vivid the camp, the uprising, and the escape. In the afterword to this reprint, Rashke relates how the Polish government in October 1993 observed the fiftieth anniversary of the escape and how it has beautified the site since a film based on his book appeared on Polish television.

Book Description Penguin, 1987. Paperback. Condition: Good. Good condition book. Good condition is defined as: a copy that has been read but remains in clean condition. All of the pages are intact and the cover is intact and the spine may show signs of wear. The book may have minor markings which are not specifically mentioned. Most items will be dispatched the same or the next working day. Seller Inventory # mon0014357634

Book Description Sphere. Paperback. Condition: Fair. A readable copy. All pages are intact, and the cover is intact. Pages can include considerable notes-in pen or highlighter-but the notes cannot obscure the text. At ThriftBooks, our motto is: Read More, Spend Less. Seller Inventory # G0722172508I5N00

Book Description Paperback. Condition: Very Good. The book has been read, but is in excellent condition. Pages are intact and not marred by notes or highlighting. The spine remains undamaged. Seller Inventory # GOR001301001

Book Description Paperback. Condition: Good. The book has been read but remains in clean condition. All pages are intact and the cover is intact. Some minor wear to the spine. Seller Inventory # GOR001581882

Book Description Paperback. Condition: Fair. A readable copy of the book which may include some defects such as highlighting and notes. Cover and pages may be creased and show discolouration. Seller Inventory # GOR000998349

Book Description Sphere Books. (Subject: The Third Reich - General) Covers creased and rubbed, pages browning. Well used but Good.The extermination camp of Sobibor, all inmates were planned to be gassed within 24 hours of arrival. In 1943 the inmates rebelled and 300 escaped, the author describes how this occurred by the manipulation of the camp staff and the acquisition of weapons. (Published: 1983) (Publisher: Sphere Books) (ISBN: 0722172508) (Pagination: xiv + 433pp, 9 photos, map) (Condition: ) UL-XXXXXX. Seller Inventory # 18035-02