Items related to My Life and Prophecies

Dixon, Jeane My Life and Prophecies

My Life and Prophecies 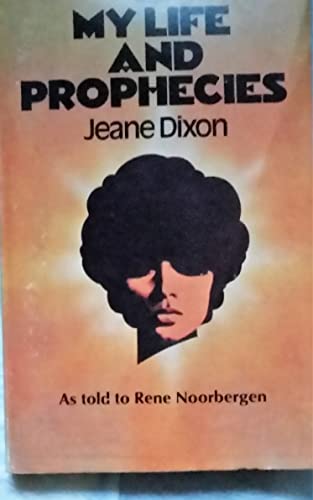 1. My Life and Prophecies: Her own story as told to Rene Noorbergen

Book Description Bantam Books, New York, 1970. Mass-market paperback. [10], 246 p. Cover states "For the first time in book form". From Wikipedia; "Jeane L. Dixon (born Lydia Emma Pinckert, January 5, 1904 January 25, 1997) was one of the best-known American Christian astrologers and psychics of the 20th century, due to her syndicated newspaper astrology column, some well-publicized predictions, and a best-selling biography.Dixon was born Lydia Emma Pinckert to German immigrants, Gerhart and Emma Pinckert, in Medford, Wisconsin, but raised in Missouri and California. Dixon's birthdate was often reported as 1918 and Dixon would offer this date to reporters, at one point even producing a passport to this effect, but she once testified in a deposition that she was born in 1910. An investigation by a reporter for the National Observer, who interviewed family members and examined official records, concluded she was born in 1904. In Southern California, her father owned an automobile dealership with Hal Roach, an American film and television producer and director Dixon claimed that while growing up in California, a "gypsy" gave her a crystal ball and read her palm, predicting she would become a famous "seer" and advise powerful people. She was married to James Dixon, a divorced man, from 1939 until his death, but the union was childless. James Dixon was a car dealer in California, who later ran a successful real estate company in Washington DC. Dixon worked with her husband in the business for many years and served as the company's president. Dixon reportedly predicted the assassination of President John F. Kennedy. In the May 13, 1956, issue of Parade Magazine she wrote that the 1960 presidential election would be "dominated by labor and won by a Democrat" who would then go on to "[B]e assassinated or die in office though not necessarily in his first term." She later admitted, During the 1960 election, I saw Richard Nixon as the winner, and at the time made unequivocal predictions that JFK would fail to win the election. In the 1956 pronouncement, she merely stated that a President would "be assassinated or die in office", not necessarily that one would be assassinated. By emphasizing a few coincidentally correct predictions and ignoring those that were wrong, she acquired both fame and notoriety. The ability to persuade the public in this matter is known as the 'Jeane Dixon effect'. Dixon was the author of seven books, including her autobiography, a horoscope book for dogs and an astrological cookbook. She gained public awareness through the biographical volume, A Gift of Prophecy: the Phenomenal Jeane Dixon, written by syndicated columnist Ruth Montgomery. Published in 1965, the book sold more than 3 million copies. Despite being married to a divorced man, and although she claimed an ability to foretell the future by gazing into crystal balls, she professed to be a devout Roman Catholic, and she attributed her prophetic ability to God. Another million seller, My Life and Prophecies, was credited "as told to Rene Noorbergen", but Dixon was sued by Adele Fletcher, who claimed that her rejected manuscript was rewritten and published as that book. Fletcher was awarded five percent of the royalties by a jury. President Richard Nixon followed her predictions through his secretary, Rose Mary Woods, and met with her in the Oval Office at least once, in 1971. In 1972, Dixon's prediction of terrorist attacks in America in the wake of the Munich massacre spurred Nixon to set up a cabinet committee on counterterrorism. She was also one of several astrologers who gave advice to Nancy Reagan during the presidency of Ronald Reagan. John Allen Paulos, a mathematician at Temple University, coined the term "the Jeane Dixon effect, " which refers to a tendency to promote a few correct predictions while ignoring a larger number of incorrect predictions. Many of Dixon's predictions proved false, such as her claims that a dispute over the offshore Chinese islands of Quemoy and Matsu would trigger the start of World War. Seller Inventory # 67450

2. My Life And Prophecies

Book Description Sphere, 1973. Condition: Good. A+ Customer service! Satisfaction Guaranteed! Book is in Used-Good condition. Pages and cover are clean and intact. Used items may not include supplementary materials such as CDs or access codes. May show signs of minor shelf wear and contain limited notes and highlighting. Seller Inventory # 0722129890-2-4