Items related to A Pilgrim's Song: Selected Poems to Mark the Poet's... 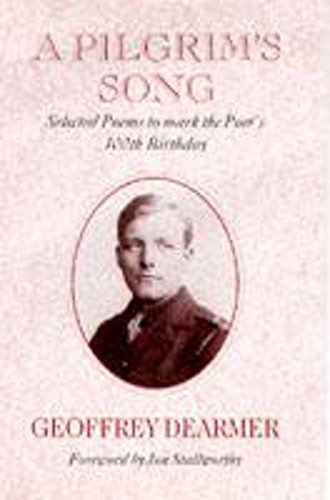 A selection of Dearmer's verse, drawn from his war poetry and from later works written in times of peace.

This slim volume was published to coincide with Geoffrey Dearmer's 100th birthday on 21 March 1993. It is not a comprehensive anthology, rather a representative selection of his verse drawn from his war poetry and from later works written in times of peace.;Geoffrey Dearmer fought at Gallipoli in 1915 (where his brother was killed), and then went on to experience the trench warfare of the Western Front. Ms father, Percy Dearmer, was a well-known Anglican clergyman and his mother a renowned illustrator and author who died of enteric fever in Serbia while serving with an ambulance unit there in 1915. Geoffrey Dearmer's many-faceted career included a stint in the censorship office of the Lord Chamberlain and a long period of outstanding service with the BBC, mainly as editor and contributor to Children's Hour.;His poetry is a deeply personal and unique chronicle of a turbulent century, expressing both the horror of war and an unquenchable belief in the human spirit. It is as full of humour and as sharply observant as Geoffrey Dearmer himself. In an era of pragmatism and compromise these poems are a rare celebration of high ideals and the 'ministering beauty of the natural world'.;

This selection of Geoffrey Dearmer's verse has been made by Laurence Cottereu, a poet himself and former Chairman and Life Vice-President of the Poetry Society. There is a foreword by Jon Stallworthy, Professor of English Literature at Wolfson College, Oxford.