Items related to An Age of Wonders: Prodigies, Politics and Providence...

Burns, William An Age of Wonders: Prodigies, Politics and Providence in England 1657-1727

An Age of Wonders: Prodigies, Politics and Providence in England 1657-1727 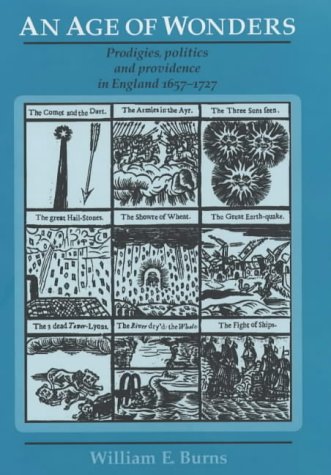 Monstrous births, rains of blood, apparitions of battles in the sky - people in early modern England found all of these events to carry important religious and political meanings. This work explores the process by which these events became religiously and politically insignificant in the Restoration period, and discusses the establishment of early modern science, the shift from "enthusiastic" to reasonable religion, and the fierce political combat between the Whigs and the Tories. As a study of Restoration politics this study fully brings to bear the insights of the new social history of science, and is based on close readings of a variety of primary sources, both in print and in manuscript form.

'This is a clearly written and well focussed book which makes an interesting contribution to our understanding of the political, intellectual and religious culture of Restoration and early Georgian England'. --Alex Walsham, University of Exeter

William E. Burns is a historian in Washington D.C.

Book Description Manchester University Press, 2002. Hardcover. Condition: Good. Small annotations to some pages, may include notes, highlighting or underlining Good condition is defined as: a copy that has been read but remains in clean condition. All of the pages are intact and the cover is intact and the spine may show signs of wear. The book may have minor markings which are not specifically mentioned. Most items will be dispatched the same or the next working day. Seller Inventory # wbb0014920349

2. Title: An Age of Wonders: Prodigies, Politics and Provide

Book Description Hardcover. Condition: Good. Item is in good condition. Some moderate creases and wear. This item may not come with CDs or additional parts including access codes for textbooks. This may not have a dust jacket. Might be an ex-library copy and contain writing/highlighting. Seller Inventory # DS-0719061407-3