Items related to Espionage, Security and Intelligence in Britain, 1945-1970...

Espionage, Security and Intelligence in Britain, 1945-1970 (Documents in Modern History) 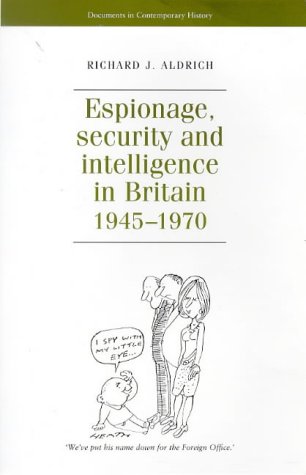 In postwar Britain, the secret services were more anxious to remain in the shadows than those of any other Western country. This volume suggests that, although discreet, they were not marginal or peripheral. They were, instead, central to British policy making and implementation. Human espionage, signals intelligence, internal security, counter-subversion, special operations and "black" propoganda were all brought to bear on Britain's problems, and were co-ordinated at the highest level. Drawing on new sources, only recently declassified in London and Washington, Richard J. Aldrich offers an authoritative documentation on aspects of government that have hitherto been poorly understood. These issues are set in a broad context, demonstrating their impact upon the direction of the Cold War, nuclear weapons policy, decolonization and Britain's relations with major allies.

Richard J. Aldrich is a Senior Lecturer in Politics at the University of Nottingham.

1. Espionage, Security and Intelligence in Britain 1945-1970 (Documents in Contemporary History)