Items related to The Commonwealth Armies: Manpower and Organization... 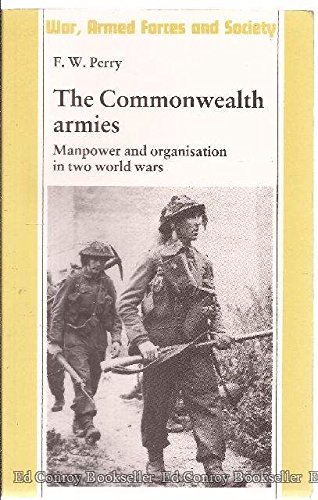 During both World Wars the armies of Britain and the Commonwealth countries were mobilized and enlarged by volunteers and conscripts. Each of the major countries had its own problems but there were similarities in development between one country and another. Subsequently most found it necessary to reduce the organizations they had created, ostensibly because of manpower shortage, in reality because the expansions being attempted were unrealistic. The major Commonwealth countries are taken in turn by the author and the development of each army is outlined together with the problems encountered. An attempt is made to assess, on demographic grounds, the size of the army which each country could have built and sustained. Although intended to be useful to students of the World Wars, the book should also appeal to those with interests in modern history or in war studies generally.

1. The Commonwealth Armies: Manpower and Organisation in Two World Wars

2. The Commonwealth Armies: Manpower and Organisation in Two World Wars

Book Description Manchester University Press, 1988. Condition: Good. This is an ex-library book and may have the usual library/used-book markings inside.This book has soft covers. In good all round condition. Please note the Image in this listing is a stock photo and may not match the covers of the actual item,400grams, ISBN:0719027675. Seller Inventory # 8018541