Items related to Children's Literature and Social Change: Some Case... 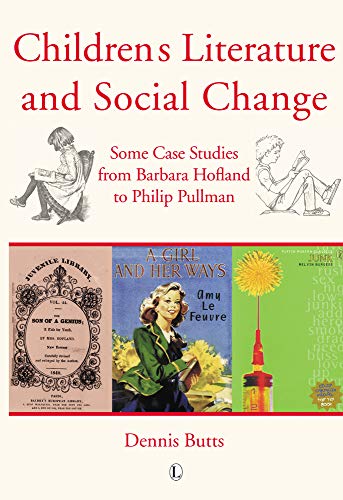 While there are many books about children's literature, few discuss it within its social context or investigate the ways writers reflect or react to change in society.

'It puts Dennis in a great tradition inhabited by such people as Ferdinand de Saussure and Roland Barthes...this is a fascinating and profound book which on many occasions broke new ground and is one which will be a permanent fixture on the Birkbeck MA!' --Michael Rosen, Children's Book History Society Newsletter No.10, August 2011

Butts is surely one of the pioneers of the discipline, helping to establish its academic credibility in the UK, at least, and involved in establishing the first MA in the subject at the University of Reading. This particular volume draws on his strengths as a critic and gives his individual voice room to shine through. [...] this is a fine collection of interconnected essays. Butts s range of reference is truly astounding not only his first-hand knowledge of children s book (including obscure works) and the associated secondary criticism, but also of social and cultural theory, and of history. As ever, Butts wears his knowledge lightly, leavening his criticism with delightful asides and unexpected links. --David Rudd, Children s Literature Association Quarterly, Vol. 38, No. 4, Winter 2013

'The writing is clear and jargon-free...and there are fresh insights into familiar texts such as Robert Louis Stevenson's Kidnapped and E. Nesbit's The Railway Children, while lesser-known writers like Amy Le Feuvre also got attention.' --Norma Clarke, in The Times Literary Supplement, September, 2010

Dennis Butts, a former Chairman of The Children's Books History Society, taught children's literature at Reading University. He has a lifelong interest in the relationship between politics, society and literature, and has written on many aspects of children's books and nineteenth-century literature. He co-edited From the Dairyman's Daughter to Worrals of the WAAF, also published by The Lutterworth Press.

Book Description James Clarke & Co Ltd, United Kingdom, 2010. Paperback. Condition: New. Language: English. Brand new Book. While there are many books about children's literature, few discuss it within its social context or investigate the ways writers reflect or react to change in society. Dennis Butts explores how shifting attitudes and historical upheavals from the 1840s onwards affected and continue to affect books written for younger audiences. Spanning from the industrial revolution to the sexual revolution, this title tells about the impact these external events have had on writers as diverse as moral storyteller Barbara Hofland and the controversial Melvin Burgess. G.A. Henty, Robert Louis Stevenson and even Philip Pullman are included in the discussion, as Butts identifies commonalities between books of the past and present, arguing that trends shown in most of the early children's literature are being displayed again now, albeit in a more subtle manner. This book will appeal to undergraduate students attending complementary courses in children's literature during their degree in English Literature or Cultural Studies. It will also be of use to postgraduate research students working in the field of Children's Literature. Seller Inventory # LIE9780718892081