Items related to Grown Ups: The Sunday Times No 1 Bestseller 2020 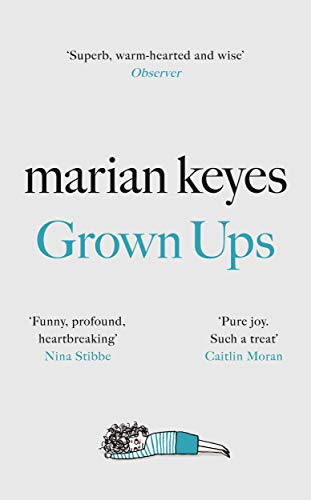 PRE-ORDER NOW: THE BRAND-NEW BOOK FROM MARIAN KEYES, THE INTERNATIONALLY BESTSELLING AUTHOR OF THE BREAK AND THE WOMAN WHO STOLE MY LIFE

They're a glamorous family, the Caseys.

Johnny Casey, his two brothers Ed and Liam, their beautiful, talented wives and all their kids spend a lot of time together - birthday parties, anniversary celebrations, weekends away. And they're a happy family. Johnny's wife, Jessie - who has the most money - insists on it.

Under the surface, though, conditions are murkier. While some people clash, other people like each other far too much . . .

Everything stays under control until Ed's wife Cara, gets concussion and can't keep her thoughts to herself. One careless remark at Johnny's birthday party, with the entire family present, starts Cara spilling out all their secrets.

In the subsequent unravelling, every one of the adults finds themselves wondering if it's time - finally - to grow up?

'It's SUCH a treat. I felt like I was reading the cleverest cream cake of words' Caitlin Moran

'Marian Keyes's gift for storytelling is utterly magnificent. I feel like I've met every single character in this book. Nobody nails chaotic families like Marian' Liz Nugent

It is charming, funny and poignant. But also profound, heartbreaking. If you already love Marian, this is her best yet. If you haven't read her, this is the one (Nina Stibbe)

THIS BOOK. Reader, I LOVED it. Funny & thoughtful & such brilliantly drawn characters I am genuinely bereft that my time with them is over. And it tackles some REALLY important issues with immense sensitivity & insight (Hannah Beckerman)

I LOVED Grown Ups so much. It's SUCH a treat. I felt like I was rolling in PURE JOY throughout. The cleverest cream cake of words (Caitlin Moran)

Marian Keyes is back with a witty and dramatic story about the Caseys, a family who seem perfect on the surface but hold some big secrets between them. When one of them starts to spill the truth after suffering concussion, things start to unravel in hilarious ways (Good Housekeeping)

Marian Keyes is the international bestselling author of Watermelon, Lucy Sullivan is Getting Married, Rachel's Holiday, Last Chance Saloon, Sushi for Beginners, Angels, The Other Side of the Story, Anybody Out There, This Charming Man, The Brightest Star in the Sky, The Mystery of Mercy Close, The Woman Who Stole My Life and The Break. Her journalism, collected under two titles, Making It Up As I Go Along and Under the Duvet: Deluxe Edition, containing the original publications Under the Duvet and Further Under the Duvet, are also available from Penguin. Marian lives in Dublin with her husband.