Items related to The Collini Case 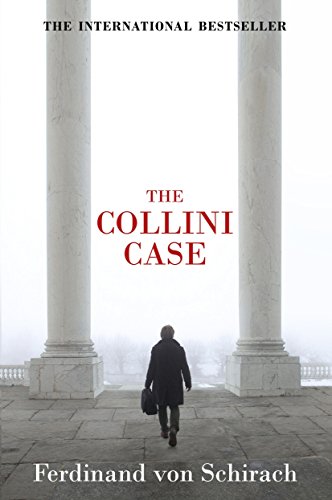 From one of Europe's bestselling writers comes a spellbinding and utterly compelling court room drama, which will stay with you for a long time. Ferdinand von Schirach's The Collini Case has been at the top of the German charts since publication and will be loved by all fans of Bernhard Schlink and John le Carré.

A murder. A murderer. No motif.

For thirty-four years Fabrizio Collini has worked diligently for Mercedes Benz. He is a quiet and respectable person until the day he visits one of Berlin's most luxurious hotels and kills an innocent man.

Young attorney Caspar Leinen takes the case. Getting Collini a not-guilty verdict would make his name. But too late he discovers that Collini's victim - an industrialist of some renown - is known to him.

Now Leinen is caught in a professional and personal dilemma. Collini admits the murder but won't say why he did it, forcing Leinen to defend a man who won't put up a defence. And worse, a close friend and relation of the victim insists that he give up the case. His reputation, his career and this friendship are all at risk.

Then he makes a discovery that goes way beyond his own petty concerns and exposes a terrible and deadly truth at the heart of German justice . . .

The Collini Case is a masterful court room drama that will have readers on the edge of their seats from start to finish.

'Ferdinand von Schirach brilliantly draws you under his spell' Bunte

Ferdinand von Schirach was born in Munich in 1964. Today he works as one of Germany's most prominent defence lawyers in Berlin. His short story collections Crime and Guilt became instant bestsellers in Germany and are translated in over thirty territories.

Ferdinand von Schirach brilliantly draws you under his spell (Bunte)

Fabrizio Collini, a quiet, respectable Mercedes Benz worker, walks into a luxurious Berlin hotel, kills a man in cold blood and waits for the police.

Taking the case is young attorney Caspar Leinen: he knows a not-guilty verdict will make his name. But too late he discovers that the victim - a popular industrialist - is known to him.

Caught in a professional and personal dilemma, Leinen is encouraged by others to give up the case. His reputation, career and even friendships are at stake.

But when he makes a shocking discovery it eclipses his own fears and hints at a terrible truth at the heart of modern Germany . . .

'A gem - sly, trenchant and provocative, none of its conclusions foregone' John O'Connell, Guardian

'How it should be done' Metro

Book Description Paperback. Condition: Good. Connecting readers with great books since 1972. Used books may not include companion materials, some shelf wear, may contain highlighting/notes, may not include cdrom or access codes. Customer service is our top priority!. Seller Inventory # S_318061778

Book Description Paperback. Condition: Very Good. The book has been read, but is in excellent condition. Pages are intact and not marred by notes or highlighting. The spine remains undamaged. Seller Inventory # GOR006239322

Book Description Condition: Good. A+ Customer service! Satisfaction Guaranteed! Book is in Used-Good condition. Pages and cover are clean and intact. Used items may not include supplementary materials such as CDs or access codes. May show signs of minor shelf wear and contain limited notes and highlighting. Seller Inventory # 0718159217-2-4

Book Description Paperback. Condition: Good. Item is in good condition. Some moderate creases and wear. This item may not come with CDs or additional parts including access codes for textbooks. Might be an ex-library copy and contain writing/highlighting. Photos are stock pictures and not of the actual item. Seller Inventory # DS-0718159217-3