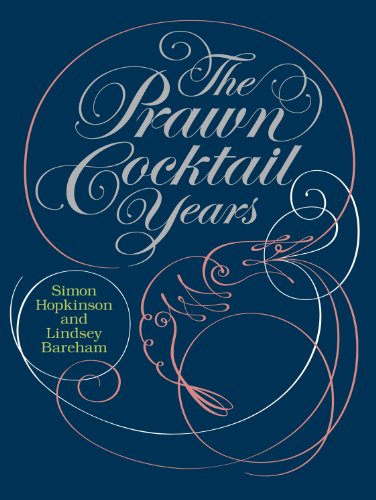 While Lindsey Bareham was helping Simon Hopkinson put together his best-selling book, Roast Chicken and Other Stories, the two of them began to reminisce about hotel and restaurant dishes they had grown up with and always loved; those Cinderellas of the kitchen that we abandoned in our quest for the wilder shores of gastronomy. Classics such as Duck a l’Orange, Weiner Schnitzel, Moussaka, Garlic Mushrooms and, of course, Prawn Cocktail, have all been slung out like old lovers but when made with fine, fresh ingredients and prepared with care and a genuine love of good eating, these former favourites should grace the most discerning of tables.

The Prawn Cocktail Years sets out to rehabilitate the food we once loved and found exciting. In so doing, the authors take us on a cook’s tour of the legendary post-war hotels and gentlemen’s clubs with their Mulligatawny and Shepherd’s Pie, to the bistros of Swinging London where Paté Maison and sizzling Escargots excited the braver palate. Then there were the first Italian trattorias where Saltimbocca and Oranges in Caramel were the order of the day and the ‘Continental’ restaurants with their exotic offerings of Beef Stroganoff, Chicken Kiev and Rhum Baba. Recipes for all these old favourites have been brought back to life as well as those classics that were once described as the Great British Meal - Prawn Cocktail, Steak Garni with Chips and Black Forest Gateau. Cooked as they should be, this much derided and often ridiculed dinner is still something very special indeed. The prawn cocktail years are staging a comeback . . .

Here they all are, fresh as paint, as if they'd never been away. Why did we let them go? Neglected, derided, dismissed as hopelessly naff, in what dismal Midlands eateries have they been waiting out the years of shame? No matter, they're back. Prawn Cocktail, Steak and Chips and Black Forest Gateau are the signature dishes of The Prawn Cocktail Years, a bravura collection of favourite restaurant dishes from the Fifties, Sixties and Seventies--years when Britain was learning to eat out. How evocative the recipe titles are (the authors describe a Proustian moment when the memories came pouring out): Coquilles St-Jacques, Sole Veronique, Beef Stroganoff, Mixed Grill, Swedish Meatballs, Wiener Schnitzel, Chicken Maryland, Crepes Suzette, Peach Melba and Profiteroles. Simon Hopkinson and Lindsey Bareham remind us firmly that although these may not chime with present food fashions (or prejudices), they were loved in their time and should be again, because when well made they are very good dishes indeed. They need no apology or special pleading.

The time machine of The Prawn Cocktail Years visits a number of favourite establishments over the years: the Fifties Hotel Dining Room, the Gentleman's Club, the Continental Restaurant. It looks into the coffee-bar madness that was Expresso Bongo (unexpectedly, perhaps, offering Cornish Pasty and Sausage Rolls for refreshment here), the Sixties Bistro, the Tratt-Era and Chez Gourmet; and returns us to the present burning to throw out our sun-dried tomatoes and lemon-grass and get down to making a good Fish Pie and Brown Bread Ice-Cream. Readers of a certain age, as they say, will be thrilled to see these old friends again; younger readers may care to discover what we ate before cooking became the new rock 'n' roll. --Robin Davidson

Simon Hopkinson was born in Bury in Lancashire where his love of good eating was established at the kitchen table. He left school at seventeen to begin a career as a chef and by the age of 21, he had started his own restaurant. In 1987, he opened Bibendum in London with Sir Terence Conran where he worked for 8 years before retiring to concentrate on writing. He has since written columns for the Independent, The Sunday Times and Sainsbury’s Magazine and is the author of four books, including the bestselling Roast Chicken and Other Stories.

Lindsey Bareham is best known for her daily after-after work recipe column in the Evening Standard, which she wrote for eight years. Currently she writes the weekly ‘Cheat’s Dinner Party’ column in the Sunday Telegraph Stella magazine and contributes a monthly recipe column to Saga magazine. She has written ten cookery books, including In Praise of the Potato, A Celebration of Soup, The Big Red Book of Tomatoes and Just One Pot. Her most recent book, The Fish Store, is a collection of recipes and stories, inspired by her holiday home in a Cornish fishing village.