Items related to Land of the Living

French, Nicci Land of the Living

Land of the Living 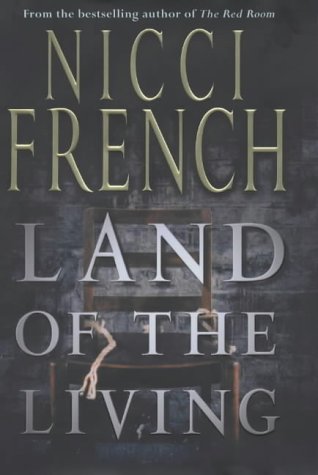 Abbie Devereaux wakes in the dark. She is hooded and bound, with no idea where she is or how she got there. Kept alive by a man she never sees, his only promise is that eventually he will kill her - like the others.

But Abbie has spirit and bloody-mindedness on her side. She counts the seconds spent alone and plots her survival. Above all she dreams of returning to normal, careless, everyday life - the land of the living.

Grasping at memories, Abbie recalls snatches of her identity, her career, and her disintegrating relationship with her boyfriend. Is there a connection between her real life and the voice in the darkness? And how can she survive in a place where fear becomes madness and the effort to survive seems too much to bear?

Land of the Living is the latest thriller from the husband-and-wife team of journalist Nicci Gerrard and writer Sean French. They have produced (as Nicci French) several first-rate novels of psychological suspense, such as The Red Room, Beneath the Skinand Killing Me Softly.

Land of the Living is possibly their most assured outing yet, with all the carefully crafted plotting and assiduous characterisation that has distinguished their earlier work. The basic situation is intense and immediate: Abbie Devereux wakes up and finds herself hooded and bound, with no idea of how she ended up in this terrifying state. She is tended to by a man she never sees: a man who makes the promise that he will eventually kill her "like the others". Abbie is forced to re-examine aspects of her identity, her career and the dying relationship she had with her boyfriend. The struggle for survival is physical and mental. If French's compelling novel owes more than a little to John Fowles' masterpiece The Collector, it is none the worse for that. And the delineation of extreme mental states has all the disturbing assurance of Patricia Highsmith. --Barry Forshaw

Yet another riveting psychological thriller from this reliable author. The protagonist awakens to find herself trussed up like a chicken, hooded, and at the degrading mercy of a stranger she cannot see, only hear. He has obviously done this before to other women and says he has killed them all. She manages a nightmarish escape but the horrors have only just begun. Despite her emaciated appearance, the authorities conclude her story is invented. She has amnesia and the more she finds out about herself, the more her world becomes beset with pitfalls. French captures immaculately the disorientation, the lack of people to trust, the bewilderment at the chilling pieces of jigsaw. Altogether they make an ace of a spine-tingling thriller, to be backed by national newspaper advertising.

1. Land of the Living French, Nicci