Items related to The World of Forever: A Memorial Anthology of Quotations...

Tangye, Derek The World of Forever: A Memorial Anthology of Quotations from the Minack Chronicles

The World of Forever: A Memorial Anthology of Quotations from the Minack Chronicles 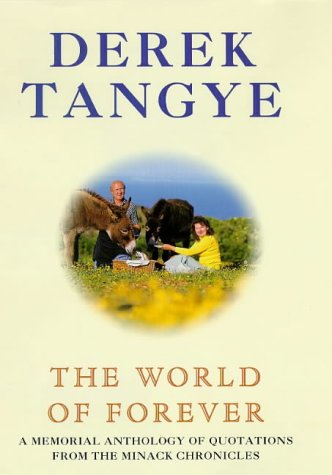 In tribute to the memory of Derek Tangye, THE WORLD OF FOREVER selects some of his best writing from the nineteen volumes of autobiography that for so long inspired thousands of readers around the world. This anthology conveys the essence of the story of the life Derek and Jeannie loved so much, from the first moment they saw Minack to the foundation of the Trust which ensures the preservation of their cliff-top land. Arranged thematically, the quotations capture the wild beauty of the quiet Cornish meadows and the Tangyes' delight in the small pleasures of a life at one with nature.

Derek Tangye was educated at Harrow and subsequently worked as a journalist on national newspapers; during the war and afterwards he was a member of MI5. He met his wife, Jeannie, when she was press officer at the Savoy Hotel and in 1949 they left the London rat race to live in a cottage on a cliff-top in Cornwall. From here he wrote all his Minack books. He died in October 1996.

An anthology of quotations taken from Derek Tangye's 19 volumes of autobiography, "The Minack Chronicles", celebrating his life. Arranged thematically, the quotations capture the beauty of the Cornish landscape, Derek and Jeannie's love story and their philosophy of life, which has inspired many.

1. WORLD OF FOREVER: A MEMORIAL ANT