Items related to Forgotten Soldiers: The Irishmen Shot at Dawn 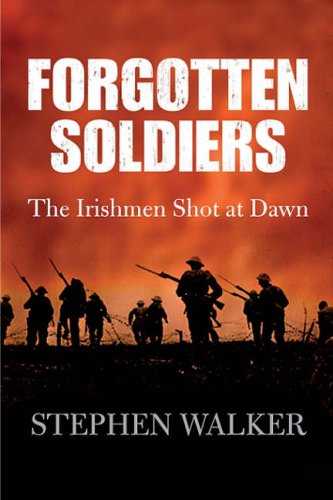 Award-winning BBC journalist Stephen Walker gives for the first time, a full account of how twenty-eight Irish men serving in British regiments met their deaths. Drawing upon war diaries, court-martial papers and interviews with veterans and family members, he explains how, often exhausted by battle, or suffering shellshock, men who refused to fight were branded as cowards, and shot at dawn by a firing squad.From the cities and townlands of Ireland to the killing fields of the Western Front and Gallipoli, "Forgotten Soldiers" traces the lives of men who enlisted to fight an enemy but ended up being killed by their own side. For decades, the full story of how the Irishmen died has largely remained a secret, but now one of the most controversial chapters in British military history can at last be told. In 2006, the British government finally pardoned those soldiers who were shot at dawn. "Forgotten Soldiers" is the first book to chronicle how relatives and campaigners fought to clear the men's names.

Stephen Walker is a reporter with BBC Northern Ireland. His journalism has received numerous national awards including honours from the Association of European Journalists and the Royal Television Society. He was the Northern Ireland Journalist of the Year in 2005.

Book Description Gill & Macmillan Ltd, 2007. Hardcover. Condition: Good. Ex-Library Book. Has usual library markings and stamps inside. All orders are dispatched the following working day from our UK warehouse. Established in 2004, we have over 500,000 books in stock. No quibble refund if not completely satisfied. Seller Inventory # mon0004682891

Book Description Hardback. Condition: Fair. A readable copy of the book which may include some defects such as highlighting and notes. Cover and pages may be creased and show discolouration. Seller Inventory # GOR006699483

Book Description Hardback. Condition: Good. The book has been read but remains in clean condition. All pages are intact and the cover is intact. Some minor wear to the spine. Seller Inventory # GOR002535085

Book Description Gill and MacMillan, Dublin, 2007. Hard Cover. Condition: READING COPY ONLY. Dust Jacket Condition: Fair. Previous owner's name inside. This book whilst a good reading copy appears to have had an unfortunate accident with a cup of tea or coffee, the dust wrapper is stained as are the edges of some pages, text is not affected. Pictorial dust wrapper book in black cloth on board with gilt lettering to spine edge. For decades , the story of the Irishmen shot at dawn has remained a secret. Now, ninety years later, the true story can at last be told. Seller Inventory # 007441