The Nine Lives of John Ogilby: Britain's Master Mapmaker and His Secrets 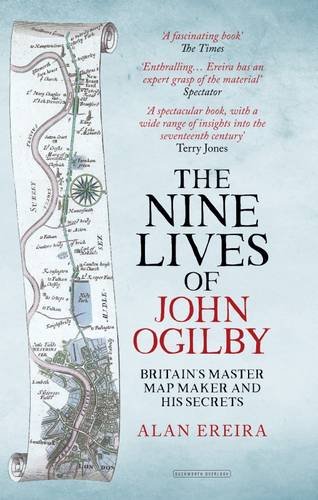 Four hundred years ago, every barrister had to dance because dancing put them in harmony with the universe. John Ogilby's first job, in 1612, was to teach them. By the 1670s, he was Charles II's Royal Cosmographer, creating beautiful measured drawings that placed roads on maps for the first time. During the intervening years, Ogilby had travelled through fire and plague, war and shipwreck; had been an impresario in Dublin, a poet in London, a soldier and sea captain, as well as a secret agent, publisher and scientific geographer. The world of his youth had been blown up and turned upside down. Beset by danger, he carefully concealed his biography in codes and cyphers, which meant that the truth about his life has remained unknown until today.

In this book, Alan Ereira brings a fascinating hidden history to light, and reveals that Ogilby's celebrated Britannia is far more than a harmless road atlas: it is, rather, filled with secrets designed to serve Charles II s sinister purpose...

The Nine Lives of John Ogilby is the story of a remarkable man, and of a covert journey which gave birth to the modern world.

'[Ereira is] rightly proud of filling in... the gaps of one of the 17th century s most mysterious lives' Ruth Scurr, Guardian

'Contains much uncharted territory... makes legible an astonishing life-story that was almost blotted out [and] opens some of the strangest locked cabinets of the strange and dangerous 17th century' Financial Times

'A fascinating biography about a little-known character... which will entertain those who enjoy conspiracy theories' BBC's Who Do You Think You Are?

'An enthralling way of reading about the connections between culture and monarchical power in the 17th century. Ereira has an expert grasp... Informative and entertaining' Spectator

'[An] entertaining account [which] tells the story of a remarkable book and its remarkable creator... The lesson of Britannia was that whoever controls the map controls the world' New Statesman

Brings a fascinating hidden history to light... the story of a remarkable man, and of a covert journey which gave birth to the modern world' History Scotland

'A fascinating tale, and Ereira writes with a light touch that belies his considerable knowledge of the less-travelled byways of 17th-century British history' Literary Review

'With its real scholarship, playful love of getting every detail to connect and framework of the big picture [it] is both a pleasure and an education' --Robert Bud, Research Keeper Science Museum

'Ereira is a master story-teller, and his biography of Ogilby is a riveting ride never dulled by its meticulously referenced detail... Ereira has given new life to this extraordinary man and his meticulously compiled roadmap' Nature

'What Ereira has done in his exhaustive combing of archives and libraries, and looking at even familiar documentation with a new and searching eye, is to join the dots of [Ogilby's] remarkable career, and to place them firmly in the context of their feverish age. The details he unearths are thrilling... the sheer heft of evidence culled from such a wide array of sources compels, and it all fits' Mike Parker, author of Map Addict at Sheetlines, Charles Close Society

Alan Ereira is an award-winning British author, historian and documentary filmmaker. He collaborated with Terry Jones on the documentary series Crusades (1995), Terry Jones' Medieval Lives (2004) and Terry Jones' Barbarians (2006), with whom he also co-authored the respective companion books.

1. The Nine Lives of John Ogilby, Britain's Master Map Maker and His Secrets

Book Description 2016. Hardcover. Condition: New. Hardcover. 'A spectacular book with a wide range of insights to the 17th century' Terry Jones Four hundred years ago, every barrister had to dance because dancing put them in harmony wi.Shipping may be from our Sydney, NSW warehouse or from our UK or US warehouse, depending on stock availability. 304 pages. 0.630. Seller Inventory # 9780715651100