Items related to Night of Triumph 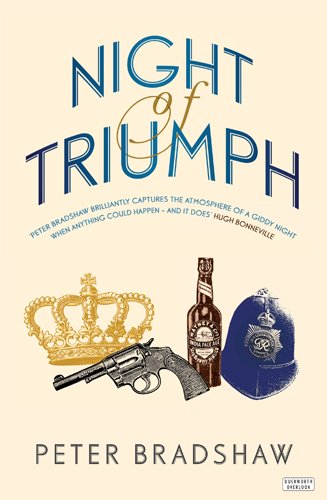 On VE Night, 1945, it is a historical fact that the then teenage Princesses, Elizabeth and Margaret, were allowed to leave the Palace incognito and join the parties with their subjects - pretending to be ordinary people for the first and only time in their lives. Peter Bradshaw has taken this nugget of history gold and brilliantly written a comedy crime thriller about the Princesses' big adventure. Priceless moments include Princess Margaret causing mayhem by stealing a policeman's hat, the foray into a Hyde Park conga line and Elizabeth's accidental encounter with London's criminal underworld. The future Queen must use all her wit and courage to get out of a very messy situation, and emerge victorious on her own personal Night of Triumph. With a sharp, dark sense of humour and affectionate approach to our Monarch's younger days, this is a wonderful, enjoyable, dark crime caper for a wide audience that is sure to attract attention.

'Funny and perceptive ... excellent writing' --New Statesman [on Dr Sweet and His Daughter]

Peter Bradshaw is Film Critic with The Guardian, and has written for the London Evening Standard, London Review of Books, the Times Literary Supplement and Tribune. He was educated at Pembroke College, Cambridge where he gained a First in English and was President Of Footlights. Bradshaw has written two fiction novels and spoof series Not Alan Clark's Diaries and frequently appears on TV and radio. He lives in London with his wife and young son.