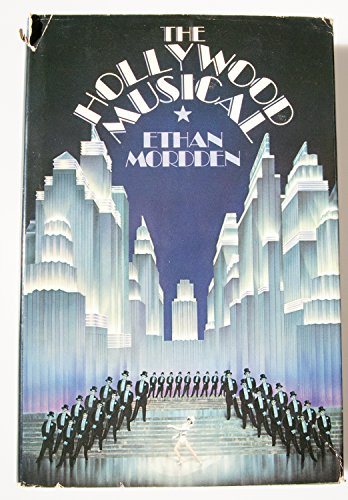 Out of his depth with opera (The Splendid Art of Opera, 1980) and non-musical theater (The American Theatre, p. 994), Mordden is on much more secure footing with this breezily detailed survey of Hollywood musicals. True, his annoying mannerisms and hollow pretensions do pop up here and there: the cutesy tone of a junior-college lecturer (""Next--stay with me; I'm driving at something""); the murky, pseudo-academic preoccupation with neatly balanced-isms; the jargon (""midcult""); the offhand, excessively opionated remarks. (Jack Buchanan was ""a smarmy British wimp""; Paul Muni in A Song to Remember gave ""the worst performance of the decade""; etc.) But, for the most part, Mordden sticks to the movies, the stars, and the songs themselves--describing, comparing, and evaluating with knowledgeable enthusiasm. The emphasis, suitably, is on the Thirties; and Mordden provides extensive appreciations of the lesser-knowns (Moonlight and Pretzels, 1933) as well as the Lubitsch landmarks 42nd Street and its successors, and the Astaire-Rogers canon (Mordden has, wisely, read his Arlene Croce). There are separate chapters on the period's big stars, on the problematic work of the songwriters, on the genres (backstage musical, operetta, musical biography, comedy musical, etc.). And with the Forties (""Terrible films--but don't you know there's a war on?""), Mordden becomes more casually dismissive as the musical-movie's vitality winds down--through the Fifties and Sixties right up to Fame, The Rose (rather overpraised), and Xanadu (""little lies in bags""). Most casual movie-musical fans will probably prefer to browse through the recent spate of lavishly illustrated reference books on the subject. Still, for those with a somewhat more analytical bent, Mordden is a lively, subjective, but reasonably insightful chatting companion. KIRKUS

Book Description Hardback. Condition: Very Good. The book has been read, but is in excellent condition. Pages are intact and not marred by notes or highlighting. The spine remains undamaged. Seller Inventory # GOR004259577

Book Description -. Hardcover. Condition: Very Good. Hollywood Musical This book is in very good condition and will be shipped within 24 hours of ordering. The cover may have some limited signs of wear but the pages are clean, intact and the spine remains undamaged. This book has clearly been well maintained and looked after thus far. Money back guarantee if you are not satisfied. See all our books here, order more than 1 book and get discounted shipping. Seller Inventory # 7719-9780715383193

Book Description David and Charles, 1982. Hardcover. Condition: Used; Good. **Simply Brit** Shipped with Premium postal service within 24 hours from the UK with impressive delivery time. We have dispatched from our book depository; items of good condition to over ten million satisfied customers worldwide. We are committed to providing you with reliable and efficient service at all times. Seller Inventory # 2745430

Book Description David & Charles, Newton Abbot, Devon, 1982. Hard Cover. Condition: Very Good. Dust Jacket Condition: Very Good. First British Edition. Traces the musical's sense of itself as both entertainment and art, from its chaotic beginning in 'the disaster that was sound' through its colourful, often exuberance in the 30s and 40s, its decline and near death in the 50s and 60s to what may be a resurgence of creativity since the 70s. Clean, tight hardback in an unclipped d/w - 261 pages including index. Prompt dispatch. 068040. Size: 8vo - over 7ľ" - 9ľ" tall. Seller Inventory # 068040