Items related to Florence; The City and Its Architecture

Richard J. Goy Florence; The City and Its Architecture

Florence; The City and Its Architecture 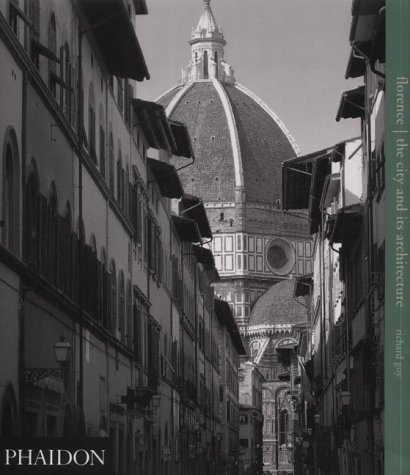 This book offers a comprehensive account of the architecture of Florence, setting the city's extraordinarily beautiful buildings within the political, economic and cultural contexts in which they were designed and constructed.

The rapid expansion of its banking interests and its wool and textile industries brought Florence unique prosperity: it became, under Medici power, the heart of the European Renaissance and the sponsor of pivotal architectural works. Stretching from the city's foundation by Julius Caesar in 59 BC to modern times, the text sets out a thematic approach that is at once in-depth and wide-ranging.

It begins with a rigorous historical overview, then proceeds to examine buildings associated with the powers of Church and State, followed by the practicalities of building and the main architectural types, ending with modern developments. Buildings covered range from the Duomo, with Brunelleschi's prodigious cupola, and the sprawling grandeur of the Palazzo Pitti, to neighbourhood churches and lesser known but mesmerizing piazzas. Landmark modernist buildings include those by the notorious architect Pier Luigi Nervi.

The astounding visual wealth of the city is reflected in specially commissioned photography, while original plans and paintings by Florentine masters illuminate the historical context. In addition to a glossary of Italian terms and biographical notes on major figures, the book includes a foldout map with a key to the buildings discussed.

'Goy covers not just the architecture but also the background conditions to its creation - political, economic and social. All the major public buildings are here and most of the significant lesser ones ... illustrated with photos that are alluring without being flashy. And as with all the best books of this kind, it certainly makes one want to head off to see, or re-see, the place for oneself.' (World of Interiors)

'Glossy and coffee-table size, but informative and thorough, Goy's guide gives a brisk history of the city, and looks at the major monuments with concise descriptions, fine photographs and proper drawings.' (The Architectural Review)

'Richard Goy has a storyteller's tallent. He can condense complicated ideas and tortuous events into clear, simple and entertaining prose ... Goy manages to convey - along with the history and the details of Florence - a sense of the wonder the city inspires. And like its subject, the book is sumptuous, beautifully designed ... and for many, irresistable.' (The Sunday Times)

'Richard Goy's excellent book concentrates on its [i.e. Florence's] visual splendour ... Throughout Goy's text is sober and scholarly, while also remaining accessible to the general reader. The illustrations are lavish ... ' (Art Quarterly)

'Richard Goy's book ... can be stronly recommended as preparatory reading for a visit. Goy's aim is to fuse together an urban history or the city with an account of its architecture up to the present day, pointing out that few studies of this kind exist, even in Italian. His text is long and well informed ... Phaidon, as usual, has packaged his words beautifully, with hundreds of well-chosen illustrations, beautifully reproduced, including a good number of plans and sections. Even those who think they know Florence may well find new sights to discover ... ' (Architect's Journal)

From the early Etruscan settlement on the hill of Fiesole to the thriving cultural and artistic centre under the Medici rule of the Quattrocento through to the present, Florence has had a unique hold on the architectural imagination. This text aims to provide the first truly comphrehensive overview of the urban history of the city, unravelling the delicately intertwined strands of politics, religion, art and social culture. Instead of a strictly chronological approach, the book is organized thematically, documenting the city's expansion and the building of both monuments and the simplest of structures. Throughout, it reveals the influence of the city's two dominant forces: the Church and the state. From Brunelleschi's amazing cupola of the Duomo, to the sprawling grandeur of Palazzo Pitti, the icons as well as the architectural typologies of the Florentine landscape are analyzed in detail. Although the book emphasizes the medieval and Renaissance periods, one section is also devoted to Florence's modern architecture, which includes landmark buildings such as Pier Luigi Nervi's Stadio Communale.

Specially-commissioned colour photography, original plans, contemporary drawings and reproductions of paintings and sculpture of renowned Florentine masters exemplify the extraordinary artistic wealth of the city which, under Medici power and patronage, became the heart of the European Renaissance. The book also includes a glossary of Italian architectural terms, biographical notes on major architects and historical figures, and a foldout city map that locates the buildings discussed in the book. "Florence: The City and its Architecture" is a companion publication to "Venice: The City and its Architecture", also by Richard Goy.

1. Florence; The City and Its Architecture (ARCHITECTURE GENERALE)

2. Florence; The City and Its Architecture (ARCHITECTURE GENERALE)

3. Florence; The City and Its Architecture (ARCHITECTURE GENERALE)