Items related to THE GUN: The AK-47 and the Evolution of War

THE GUN: The AK-47 and the Evolution of War 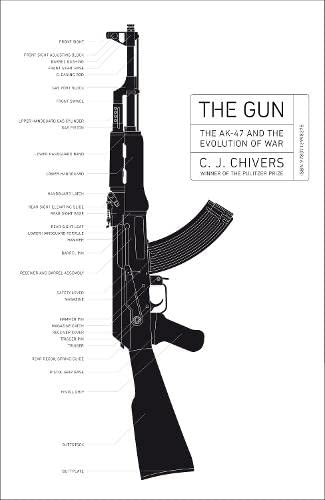 The AK-47, or 'Kalashnikov', is the most abundant and efficient firearm on earth. It is so light it can be used by children. It has transformed the way we fight wars, and its story is the chilling story of modern warfare.

C. J. Chivers's extraordinary new book tells an alternative history of the world as seen through these terrible weapons. He traces them back to their origins in the early experiments of Gatling and Maxim, and examines the first appearance of the machine-gun - a weapon that first created the 'asymmetric' colonial massacres enjoyed by the British in Africa but which then led to the nightmarish stalemate of the First World War. The quest for ever greater firepower and mobility culminated in the AK-47 at the beginning of the Cold War, a weapon so remarkable that, over sixty years after its invention and having broken free of all state control, it has become central to civil wars all over the world. The machine-gun reused many innovations associated with the new agricultural technology of its time (as did the tank), and there is perhaps no better example of how so much of the modern era has turned on the awful ambiguity at the heart of human inventiveness.

Drawing on a huge amount of fascinating and original research, The Gun is the story of modern violence: its inventors, its users and its victims. It examines the weapon's impact from Eastern Europe to Vietnam to Afghanistan and Iraq. It is a book of eccentrics, sadists, obsessives, but also of the countless individual soldiers, terrorists, militiamen and civilians whose lives the AK-47 has transformed or destroyed.

The AK-47, or 'Kalashnikov', is the most abundant and efficient firearm on earth. It is so light it can be used by children. It has transformed the way we fight wars, and its story is the chilling story of modern warfare. This book tells an alternative history of the world as seen through these terrible weapons.

With impelling force, C. J. Chivers tells a remarkable story of how this one, superbly reliable firearm became the most abundant ever produced, and was to exceed the consequences even of Soviet nuclear know-how in the Cold War, and beyond (Alistair Horne, author of 'The Price of Glory' and 'A Savage War of Peace')

Dazzling ... startling ... The Gun does exactly what the best art history or music writing does - it opens our eyes to see anew the familiar (Doug Stanton, author of 'Horse Soldiers')

The Gun is for those who wonder how we fight today and why we fight that way. C. J. Chivers has given us a seminal work (James Bradley, author of 'Flags of Our Fathers')

Absorbing and beautifully written ... The story of this particular weapon becomes in an important sense the story of the violence and threat at the heart of the more than sixty years since the gun was first introduced (Richard Overy)

Chivers is a first-rate war correspondent and a prodigious researcher ... The Gun is likely to become the standard account of the world's standard assault rifle (Max Boot New York Times Book Review)

Chivers's mastery of history and engineering is matched by his mastery of language ... The Gun is a riveting read (Raymond Bonner Guardian)

Chivers tells the story well ... [he is] superb on the technical history of the AK-47 and its predecessors, but he also strikingly underlines its human cost as well as weaving adeptly through the propaganda (Tim Newark Financial Times)

A formidable feat of research and writing ... he has produced surely the final word on one of the most iconic weapons of our times (Roger Moorhouse Independent on Sunday)

Chivers is admirably meticulous in his research (Justin Marozzi Telegraph)