Items related to The Third Reich at War: How the Nazis Led Germany from...

Evans, Richard J. The Third Reich at War: How the Nazis Led Germany from Conquest to Disaster (Allen Lane History)

The Third Reich at War: How the Nazis Led Germany from Conquest to Disaster (Allen Lane History) 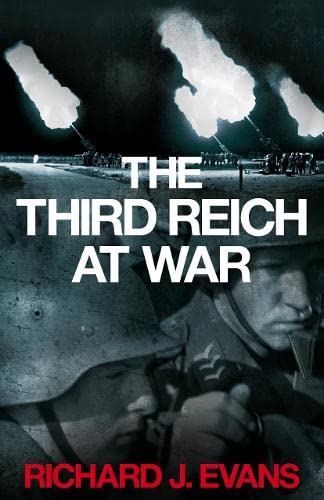 The third and final volume in Richard J Evans’s masterly trilogy on the history of Nazi Germany traces the rise and fall of German military might, against the background of the mobilization of the ‘people’s community’ in the service of a war of conquest, racial subjugation and genocide.

Interweaving a broad narrative of the war’s progress with personal testimony from a wide range of people, from generals to front-line soldiers, from Hitler Youth activists to middle-class housewives, Richard Evans lays bare the dynamics of a society plunged into war at every level. The great battles and events of the war are here, from the Battle of Stalingrad to Hitler’s suicide in the bunker, but just as important is the recreation of the daily experience of ordinary Germans in wartime, under the growing impact of the mass bombing of Germany’s towns and cities. At the centre of the book is the Nazi extermination of Europe’s Jews, set in the context of Hitler’s genocidal plans for the racial restructuring of Europe.

Blending narrative, description and analysis, The Third Reich at War creates a picture of a society rushing headlong to self-destruction and taking a large part of Europe with it.

'The narrative is written with the same masterly historical flair and eye for telling detail that marked the first two volumes. This will surely be the standard history for many years to come.' -- Telegraph

'With this third volume, Richard Evans has accomplished a masterpiece of historical scholarship ... [he] has produced the best and most up-to-date synthesis of the huge work carried out on the subject over the past decades.' -- Anthony Beevor, Times

'the author displays a masterly understanding of the politics and sociology of the Third Reich ... [and the] book contains much intriguing anecdotage' -- Max Hastings, Sunday Times

`Professor Evans is history's master of the Holocaust ... in his restrained but passionate way, [he] has an apprehension of times past that should warn us about the day after tomorrow ... He always strives magisterially to make us understand - and to sense the demons within ourselves.'
-- Observer

`This masterly study of the Nazi regime at war marks the welcome completion of a three-volume account of the Third Reich by one of the world's foremost experts on modern German history ... As with the previous two volumes, it is based on an immense amount of learning, but wears its learning lightly. The result is an very readable, well-paced account that is fully familiar with the huge amount of specialist scholarship in this field but never gets bogged down by excessive detail or distracted by debates which are of concern only to experts.' -- Neil Gregor, History Today

1. The Third Reich at War: How the Nazis Led Germany from Conquest to Disaster (Allen Lane History)

Book Description Allen Lane, 2008. Hardcover. Condition: Very Good. Very Good: a copy that has been read, but is in excellent condition. Pages are intact and not marred by notes or highlighting. The spine remains undamaged. Most items will be dispatched the same or the next working day. Seller Inventory # wbb0014885560

Book Description Allen Lane, 2008. Hardcover. Condition: Good. Good hardcover copy with jacket, solid binding, mild to moderate reading/age wear, jacket has some mild edge wear, may have ex owner inscription and/or some light markings. We take great pride in accurately describing the condition of our books and media, ship within 48 hours, and offer a 100% money back guarantee. Customers purchasing more than one item from us may be entitled to a shipping discount. Seller Inventory # mon0000236484

4. The Third Reich at War: How the Nazis Led Germany from Conquest to Disaster (Allen Lane History)

Book Description Allen Lane, 2008. Hardcover. Condition: Good. Good condition is defined as: a copy that has been read but remains in clean condition. All of the pages are intact and the cover is intact and the spine may show signs of wear. The book may have minor markings which are not specifically mentioned. Most items will be dispatched the same or the next working day. Seller Inventory # mon0015025952

5. The Third Reich at War: How the Nazis Led Germany from Conquest to Disaster (Allen Lane History)