Items related to The Pleasure of Finding Things out: The Best Short...

The Pleasure of Finding Things out: The Best Short Works of Richard P. Feynman 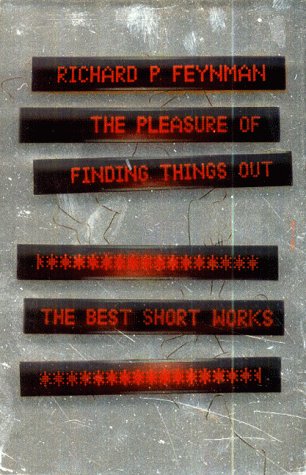 This magnificent collection of Feynman's best short works includes uproarious tales of Feynman's student experiments, his famous report on the Space Shuttle Challenger disaster, his experiences on the Manhattan Project at Los Alamos during World WarII, two seminal lectures on the future of computers and nanotechnology, and fascinating stories of the physicist as a child.

The iconoclastic American physicist Richard Feynman won a Nobel Prize for solving a sub-atomic puzzle using home-brewed methods once dismissed as ludicrous. But Feynman arguably did science an even bigger service through his iconoclastic persona, which gave the lie to the view that all scientists are gauche, boring and obsessive. As first revealed in his brilliantly entertaining autobiography Surely You're Joking Mr Feynman!, Feynman was a wise-cracking genius with a penchant for topless bars, bongo-drums and winding people up. And he was obsessive--not about one narrow question, but about the whole puzzle of how Nature works, from the spin of an electron to the spin of wobbling dinner-plates. Since his untimely death from cancer in 1988, many books based on articles by or about Feynman have appeared. So what does The Pleasure of Finding Things Out add ? It's touted as a "greatest hits" volume--and it's a fair description. This well-chosen collection allows newcomers to see what all the fuss surrounding Feynman is about, from his work on quantum theory to his safe-cracking exploits during the Manhattan Project. But newcomers and long-standing Feynman fans alike will enjoy the newly-reprinted material, especially a 1979 magazine interview which includes fascinating insights into how a brilliant mind tackles Nature's mysteries. For once, a science book that lives up to its name, giving much pleasure from finding out more about this genuine scientific hero. --Robert Matthews

More gems from the Feynman factory. If some things are old or borrowed, it hardly matters: there are enough new or unfamiliar to charm fans. Since the Nobel laureate's death, there have been biographies, "as-told-to" accounts, and various interviews and selected writings that continue to reveal the workings of one of the most remarkable and inventive minds in physics. But part and parcel with the revelations of genius are the pranks and idiosyncrasies that have built the Feynman legend of bongo player, gambler, bon vivant, and girl watcher. The current collection replays a few of those choice bits. But it's much more a picture of Feynman as passionate and scrupulously honest scientist, insisting always that truth is never absolute. There is much homage to his father, who inspired the habit of asking questions that go to the heart of the matter of how and why things work. A wonderful Caltech graduation speech allows him to contrast real with pseudoscience and speaks to the absolute necessity of providing one's peers with all the information they need to judge one's work. There's a lovely reminiscence of himself as a nervous 24-year-old asked to present a seminar at Princeton before a group that included Eugene Wigner, John Wheeler, Wolfgang Pauli, John von Neumann and Albert Einstein. When it's over, Pauli gets up and turns to Einstein and says, don't you agree that this theory cannot be right? To which Einstein replies, "N-o-o-o." "Nicest no I ever heard," Feynman says. The collection includes Feynman's insightful minority report on the Challenger disaster, his well-known disdainful comments on philosophy and behavioral science, his despair of today's cultural ignorance of the nature of science, and his prescient thoughts on parallel processing for computers and principles of miniaturization we now call nanotechnology. All said, of course, in the idiom of the boy from New York whose pleasure in finding things out affords the reader another sort of pleasure. (Kirkus Reviews)

1. The Pleasure of Finding Things out: The Best Short Works of Richard P. Feynman

Book Description Hardback. Condition: Very Good. The book has been read, but is in excellent condition. Pages are intact and not marred by notes or highlighting. The spine remains undamaged. Seller Inventory # GOR002933965

2. The Pleasure of Finding Things Out: The Best Short Works of Richard P.Feynman

Book Description Allen Lane, 2000. Hardcover. Condition: Very Good. Very Good: a copy that has been read, but is in excellent condition. Pages are intact and not marred by notes or highlighting. The spine remains undamaged. Most items will be dispatched the same or the next working day. Seller Inventory # wbb0014321658

3. The Pleasure of Finding Things Out: The Best Short Works of Richard P.Feynman

Book Description Allen Lane, 2000. Hardcover. Condition: Good. Light foxing to the page edges. Good condition is defined as: a copy that has been read but remains in clean condition. All of the pages are intact and the cover is intact and the spine may show signs of wear. The book may have minor markings which are not specifically mentioned. Most items will be dispatched the same or the next working day. Seller Inventory # mon0015450965

4. Pleasure of Finding Things Out : The Best Short Works of Richard P. Feynman

Book Description Penguin Books, Limited, 2000. Condition: Good. Ships from the UK. Former Library book. Shows some signs of wear, and may have some markings on the inside. Seller Inventory # GRP9990081

5. The Pleasure of Finding Things out: The Best Short Works of Richard P. Feynman

6. The Pleasure of Finding Things Out: The Best Short Works of Richard P.Feynman