Items related to Essential English for Journalists, Editors and Writers... 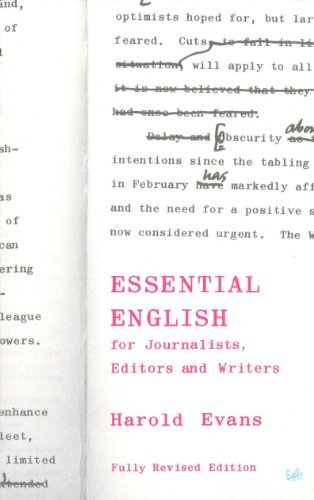 Essential English is an indispensable guide to the use of words as tools of communication. It is written primarily for journalists, yet its lessons are of immense value to all who face the problem of giving information, whether to the general public or within business, professional or social organisations.

RECOMMENDED BY THE SOCIETY OF EDITORS

Don't write "remunerate" when you mean "pay". You should "send" not "transmit" and "help" but not "facilitate". Take care with meanings too. If you're "disinterested" you're not bored, you're impartial. "Less" is not interchangeable with "fewer" and a "principle" is different from a "principal".

Harold Evans, editor of The Sunday Times from 1967 to 1981 and then of The Times for a year, first wrote his Newsman's English and News Headlines in the 1970s. In an age of increasingly sloppy English, Evans's books acquired the status of classics with their condemnation of dangling participles and gratuitous adjective and adverbs. Now they've been edited, updated and merged into a single new volume by Crawford Gillan. The emphasis, which hasn't dated at all, is still on the need for plain muscular English which says what it has to say in as few well-chosen words as possible.

The book has at least three uses. First, it could be a text book for trainee journalists, especially given the large number of published verbose examples Evans quotes and then rewrites as demonstration pieces. Second, it has plenty of advice for experienced journalists and editors trying to write better. Third, it is full of useful advice for anyone--beyond the media--who wants to write more coherently.

Essential English certainly raises awareness. You probably won't read it without feeling obliged to double back and delete your redundancies the next time you write something. In the common expression "depreciate in value" the last two words, for instance, can go without loss of meaning. You don't need "gainful" in front of "employment" either and Evans lists dozens of other examples. And be brutal with tired expressions such as "wealth of information" or "pillar of the church", he advises. He also provides an intriguing thesaurus for headline writers in search of pithiness. For "harmonisation," try "accord", "bargain", "compact", "pact", "peace", or "truce", he says. --Susan Elkin

"Every journalist in England should read this exceptional book. Harry Evans is a master of our trade and a master of how to use the English language" (Piers Morgan)

"English is the world's most used and abused language. This book in on the side of the angels. It should become an essential textbook for every journalist" (Paul Dacre, editor of the Daily Mail)

"Harry Evans is one of the great newspaper professionals of his time, and his book should be a standard text for every journalist" (Max Hastings, Editor, Evening Standard)

"Thank God it's back in print. It has never been more necessary" (John Humphrys)

Book Description Vintage Publishing, United Kingdom, 2003. Paperback. Condition: New. Revised ed. Language: English. Brand new Book. Essential English is an indispensable guide to the use of words as tools of communication. It is written primarily for journalists, yet its lessons are of immense value to all who face the problem of giving information, whether to the general public or within business, professional or social organisations.FULLY REVISED AND UPDATED BY CRAWFORD GILLANRECOMMENDED BY THE SOCIETY OF EDITORS. Seller Inventory # AAZ9780712664479