Items related to Will In The World: How Shakespeare Became Shakespeare

Greenblatt, Stephen Will In The World: How Shakespeare Became Shakespeare 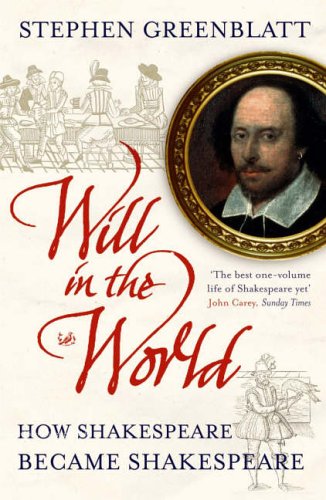 This acclaimed account of Shakespeare's life and work recovers and explores the links between the man and his world. It yields a new understanding of his genius and brilliantly makes clear how Shakespeare became Shakespeare.

Why should we read Stephen Greenblatt’s Will in the World? There have been innumerable biographies of William Shakespeare, but the greatest of all writers remains the great unknowable. We know about the petty business dealings, the death of his son, his career as a man of the theatre, and (of course) the seemingly contemptuous bequeath to Anne Hathaway of his ‘second best bed’. But any biographer is left scratching for much more than that--apart, of course, from adducing what can be read of the man's characters from his work (an enterprise fraught with danger). Shakespeare is not Hamlet, Lear or Benedict--though, of course, he is also, in a real sense, all three.

What makes Greenblatt's account the most valuable in many years (literally so, since famously massive advances were paid for it) is the synthesis of incisive scholarship, immense enthusiasm for the subject and an unparalleled ability to conjure up the Elizabethan world with colour and veracity. If the author's conclusion's about the genius at the centre of his narrative are open to question, Will in the World is none the worse for that--Greenblatt enjoys provoking the reader, and the result is an energetic conjuring of a brilliant man and those around him (Christopher Marlowe and Ben Johnson are evoked with enviable skill, as are such figures as the prototype for Falstaff, Robert Green).

With something of the vigour of the Bard’s writing, Greenblatt takes us through the bawdy, teeming Bankside district (centuries before it became a tourist destination), and the Machiavellian, dangerous world of the court--in fact, all the splendour and misery of the Elizabethan age--and at the centre of it all, its greatest artist. The Will we meet here may owe much to Greenblatt’s very personal interpretation, but the portrait is fascinating.--Barry Forshaw

"A vast shelf of biographies of the Bard exists, but this is the book I would take with me to a desert island" (Jay Parini Guardian)

"A work of wonderful erudition that can be read as an accessible introduction to the social and political milieu from which Shakespeare emerged, and as an elegant guide to the astonishing poems and plays themselves" (New Statesman)

"Both insightful literary criticism and a gripping piece of psychological detective work ... Stephen Greenblatt has few equals as a Shakespeare scholar" (Metro)

"A delight, full of new insights and infused with a rich understanding of precisely why Shakespeare’s writing gives us such lasting pleasure ... quite superb" (John Simpson Sunday Times 'Books of the Year')