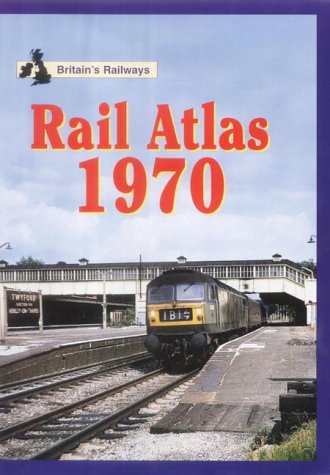 Taking 1 May 1970 as its cut-off date, this historical atlas provides a graphic portrait of the railway network as it existed after the 1960s closures that followed the Beeching report.

In 1963 the then Chairman of the British Railways Board, Dr (later Lord) Richard Beeching produced his report on the future structure of the railway industry. Innocuously entitled The Reshaping of Britain's Railways, the report was to become one of the most controversial documents ever produced on a major British industry and, 40 years on, still represents one of the defining moments of Britain's railway history. Tasked by the government with reducing the ever-increasing losses suffered by the railway industry, Beeching's response was to take a root-and-branch analysis of each line that was still operational; the result was the infamous 'axe' - the proposal to close vast swathes of the railway network, thereby creating vast areas that were no longer served by rall. Although there were more positive aspects to the report, such as the emphasis on bulk freight traffic, it was the closure programme that most people, and especially railway enthusiasts, remember most. From 1964 onwards, the railways contracted rapidly; even the election of a new Labour Government in 1964 failed to stem the flow of closures but, by 1970, the majority of closures scheduled by Beeching had occurred.

The early 1970s, however, did witness further limited closures as many of the lines which had been reprieved earlier, such as the lines serving much of east Lincolnshire, succumbed. In the second of Ian Allan Publishing's new series of historical railway atlases, the year 1970 comes under the spotlight. Taking 1 May 1970 as the cut off, the book provides a graphic portrait of the railway network as it existed after the wholesale closures of the 1960s. In 45 full colour maps, along with a comprehensive index, the user is provided with an interesting snapsnot of the railway industry at the time. For many, it will be illuminating to see how many routes survived the Beeching era only to succumb in the period after 1970; routes such as those to Bridport, lifracombe, Swanage and Minehead all feature as passenger routes while others, such as the branch to Hemyock, continued to eke out their existence as freight only lines.