Items related to Concept of Prayer 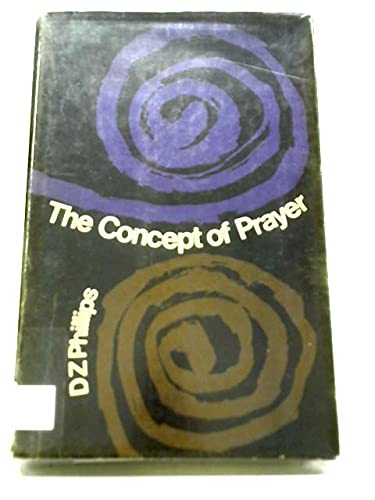 Many contemporary philosophers assume that, before one can discuss prayer, the question of whether there is a God or not must be settled. In this title, first published in 1965, D. Z. Phillips argues that to understand prayer is to understand what is meant by the reality of God. Beginning by placing the problem of prayer within a philosophical context, Phillips goes on to discuss such topics as prayer and the concept of talking, prayer and dependence, superstition and the concept of community. This is a fascinating reissue that will be of particular value to students with an interest in the philosophy of religion, prayer and religious studies more generally.

Book Description Routledge and Kegan Paul PLC, 1965. Hardcover. Condition: Used; Good. Dispatched, from the UK, within 48 hours of ordering. This book is in good condition but will show signs of previous ownership. Please expect some creasing to the spine and/or minor damage to the cover. Grubby book may have mild dirt or some staining, mostly on the edges of pages. Ripped/damaged jacket. The dust jacket of this book is slightly damaged/ripped, however, this does not affect the internal condition. Seller Inventory # CHL6185907

Book Description Hardback. Condition: Good. The book has been read but remains in clean condition. All pages are intact and the cover is intact. Some minor wear to the spine. Seller Inventory # GOR004842211