Items related to The White Umbrella 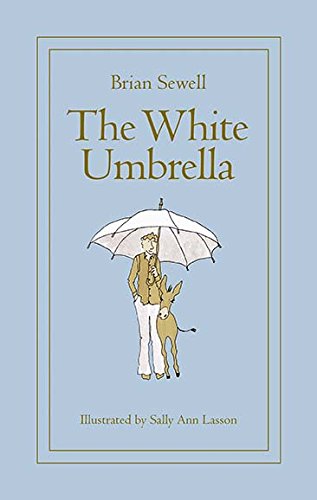 'Brian Sewell has published his first children's book at the age of 83, written while recuperating from an operation. While nobody would wish illness on the art critic - not even those painters who have felt the sharp end of his nib - that bedrest has produced a beautifully written book which should become a classic' --The Times (Children's Book of the Week)

'It's a lovely, wistful story ... moving ... Adults will also be charmed and educated by The White Umbrella' --Mail on Sunday

'This, we can only hope, is not Sewell's last testament, but even if it is, it bears witness to a luminous, and, yes, peculiarly British, talent' --Simon Kelner, Independent

'A heartwarming tale for children, The White Umbrella is at first glance a simple fable in which determined good intentions will always win the day ... Only in the final chapter do writer and character come together as Mr B returns to his beloved dogs ... As anyone who read Sewell's memorably brilliant canine memoir, Sleeping with Dogs, will know, it's what he writes about best. Sewell may be aiming his book at "today's incurious children", hoping it may get them to "think a little bit". But I say don't worry about them; buy it for yourself and fall even more deeply in love with those dogs' --Evening Standard

'An artful, disarming corrective to the small-minded and simplistic. Wonderful, in its strictest sense' --Country Life

'In the case of this novella about a sensitive man called Mr B who rescues a donkey in Peshawar, names her Pavlova after the ballerina, and brings her overland all the way back home to Wimbledon to meet his dogs named after women painters of the twentieth century, this feeling that the target reader is the childhood author himself is overwhelming. You learn more about the young, sweet, aesthetically precocious Brian Sewell while reading it than you do even about Persian carpets and the dusty towns on the old Silk Route' --Spectator

'[A] delightful little novella, the characters of which are comically brought to life by Sally Ann Lasson's sweet and simple black-and white-illustrations' --Independent on Sunday

'With lovely, spindly illustrations by Sally Ann Lasson, the plot has charm and grace ... young readers will be both moved by the donkey's plight, and amused and touched by her eventual fate; while the connection between man and animal resonates powerfully' --TLS

'It is a quiet, beautifully told story' --Oldie

'Britain's most famous and controversial art critic' (Guardian), Brian Sewell is also the best-selling author of two volumes of autobiography - Outsider and Outsider II. An Orwell Prize-winning journalist and renowned animal lover, his beloved dogs star in his latest memoir, Sleeping with Dogs. The White Umbrella is his first work of fiction. Sally Ann Lasson started work as a cartoonist at the Independent in 1986 and her strip 'As If' appeared daily there from 1999 to 2011. She has written extensively for all the major newspapers and her cartoon books have been translated into several languages.