Items related to Hamlet's Mother and Other Women: Feminist Essays...

Hamlet's Mother and Other Women: Feminist Essays on Literature 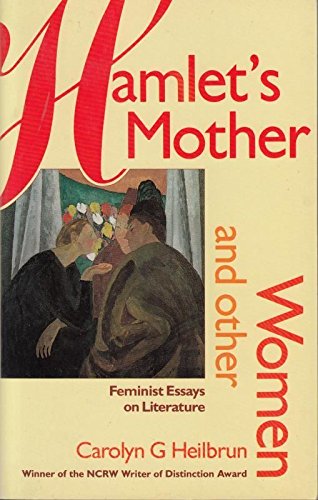 In the three decades since her revolutionary and seminal article "The Character of Hamlet's Mother," Carolyn Heilbrun has been a prophet in the field of women and literature, gender and culture. This collection of graceful and uncompromising essays charts her development as a feminist writer and critic, which has culminated in such groundbreaking works as REINVENTING WOMANHOOD and WRITING A WOMAN'S LIFE.

Shakespeare's Gertrude was first among many literary figures illuminated by Heilbrun's feminist sensibility. Others include Homer's Penelope -- an archetypal single parent, weaving herself a new life for which she was given no script; Jo in LITTLE WOMEN, a model of autonomy for generations of female readers; Elizabeth Bennet, remarkable for the promise of friendship in her marriage with Darcy; and Harrriet Vane, outrageously unique on many counts. The consistency and clarity of Heilbrun's vision in matched only by its heterogeneity, as she discusses Margaret Mead and Freud's daughters, Virginia Woolf and James Joyce, resistance to feminist studies in academia, mothers and daughters, fiction and myth, tomboys and surrogate sons, and the detective story, of which Heibrun herself (as Amanda Cross) is one of the ablest practitioners. HAMLET'S MOTHER AND OTHER WOMEN will spark recognition, again and again, in readers on their own quest for female redefinition.

[Heilbrun's] arguments for the centrality of feminist criticism are advanced with passion and enlivened with wit. The New York Times Book Review A book to delight the heart... filled with delicate, sometimes startling gems of perception. New York Newsday A wonderful, living book for those who love to read and to think. It is engaged, fervent, good-humored; it is wise and intellectually substantive and a real pleasure to read. -- Andrea Dworkin

Carolyn G. Heilbrun is Avalon Foundation Professor in the Humanities at Columbia University. She has written Christopher Isherwood, Toward Androgyny, Reinventing Womanhood, Writing a Woman's Life, and numerous works of detective fiction under the name Amanda Cross.

1. Hamlets Mother and Other Women

2. Hamlet's Mother and Other Women: Feminist Essays on Literature

Book Description Paperback. Condition: Very Good. The book has been read, but is in excellent condition. Pages are intact and not marred by notes or highlighting. The spine remains undamaged. Seller Inventory # GOR002218091

3. Hamlet's mother and other women

4. Hamlet's Mother and Other Women: Feminist Essays on Literature

Book Description Paperback. Condition: Used: Very Good. Columbia University Press Light wear to the edges of the book, with a small amount of discoloration, otherwise the book is in very good condition, tight with clean unmarked pages. Quality Books. Because We Care - Shipped from Canada. Usually ships within 1-2 business days. If you buy this book from us, we will donate a book to a local school. We donate 10,000+ books to local schools every year. If there are any problems, pleases ask us to resolve it amicably before leaving any feedback. Seller Inventory # R23390S

5. Hamlet`s Mother and Other Women

Book Description The Women`s Press Limited, 1991. Paperback. Condition: Very Good. Synopsis:- Sorry Synopsis Not Available-> the publiser of this PAPERBACK book is The Women`s Press Limited in 1991 it has 266 pages booksalvation have grade it as Very Good and it will be shipped from our UK warehouse shipping is Free for UK buyers and at a reasonable charge for buyer outside the UK. book. Seller Inventory # 9780704342736BQ1472