Items related to The Dogs and the Wolves 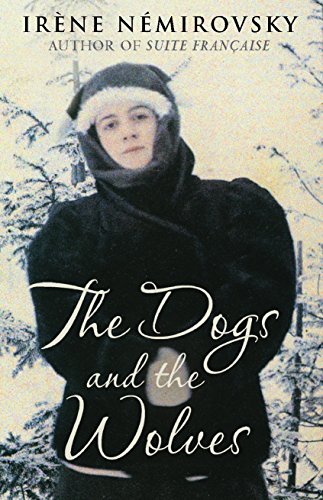 This wonderful, panoramic novel goes right back to Irčne Némirovsky's roots, sweeping the reader from the Jewish quarter of a Ukrainian city in the early years of the twentieth century to Paris in the twenties and thirties, and back again to eastern Europe in a snowy winter on the eve of war.

At its heart is a tragic love, between Ada from the poor Jewish quarter and Harry, son of a rich financier. The dogs are the comfortable, assimilated rich Jews up on the hill, while the wolves, their distant cousins, struggle below in the ghetto. Ada grows up motherless, looked after first by her father, then by an indomitable, social-climbing aunt, and eventually moves to Paris with her aunt's family, all of them looking for a brighter future. Ada makes a living in Paris as an artist, painting scenes from the world she has left behind. Her cousin Ben, intense and ferociously intelligent, has loved her for years; they share memories - together they survived the terrible pogroms of their childhood - and he presses her to marry him. But Harry Sinner is also in Paris, moving in exclusive circles, and infatuated with the daughter of a wealthy gentile banker. One day he buys two paintings which remind him of his past... and the course of Ada's life changes once more.

But as recession and revolutions shake previously rich regimes, even a solid international bank can find itself over-extended and vulnerable to greed. Ben, now working for the Sinner family bank in Paris, is well-placed to take the kind of risks he could only dream of in the past. And as summer draws to a close, Ada's world is disintegrating and she is faced with a fateful decision.

The Dogs and the Wolves, painted on a broad, vibrant canvas, with Némirovsky's acute eye for small cruelties and everyday sacrifice, is an achingly poignant novel about blood and belonging, dreams and desire.

Dogs and the Wolves

a bitter, angry book reflecting nastiness between Jews, as well as the prejudice they suffered...exposed with characteristic boldness
--The Times

"...what moves the reader are Nemirovsky's exquisite descriptions of character, which reveal a brilliantly sharp eye..." --Saturday Telegraph, Lorna Bradbury

`Nemirovsky...makes this story as much a page-turner as anything she has written.' -- Guardian

"most autobiographically illuminating and engrossing [of her novels] so far" --Sunday Times,

`It has a classic feel; a book to be revisited in the hope of finding more delights within.'
--Waterstone's Books Quarterly