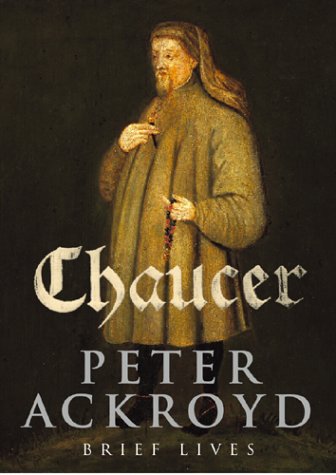 Geoffrey Chaucer, who died in 1400, enjoyed an eventful life. He served with the Duke of Clarence and with Edward III, and in 1359 was taken prisoner in France and ransomed. Through his wife, Philippa, he gained the patronage of John of Gaunt, which helped him carve out a career at Court. His posts included Controller of Customs at the Port of London, Knight of the Shire for Kent, and King's Forester. He went on numerous adventurous diplomatic missions to France and Italy. He began to write in the 1360s, and is now known as the father of English poetry. His Troilus and Cressida is the first example of Modern English literature, and his masterpiece, Canterbury Tales, the forerunner of the English novel, dominated the last part of his life. Peter Ackroyd's short biography is rich in drama and colour. It evokes the medieval world of London and Kent, and provides an entertaining introduction to Chaucer's poetry. (2003-06-09)

Good condition. Shipped from the U.K. All orders received before 3pm sent that weekday.