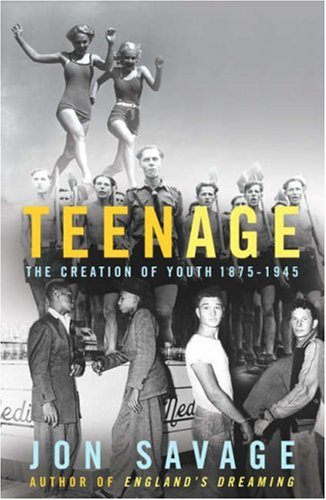 In 1945, just as the war was ending, 'the teenager' arrived. This is the story of how we got to that moment - the century and a half of ferment, folly, and angst that created a separate Teen Age in Europe and America. Jon Savage goes back to 1875 (when the first bestselling teenage memoir appeared and the first teenage mass murderer was tried), and takes us all the way through to the death of Anne Frank. In between, we roam London, New York, Paris and Berlin with hooligans, Apaches, and other gangs; explore free love with Rupert Brooke and eternal youth with Peter Pan; see commerce and advertising grab a new market and watch the relentless militarisation of youth, from the Boy Scouts to the Hitler Youth. Savage describes all ranks and kinds of people, from flappers and zootsuiters to the Bright Young Things, the unemployed and the Lost Generation. The book rings with music, from Ragtime to Swing, and the stories come fast and furious, comic, poignant, painfully moving. Following the endless efforts of adults to contain, channel and control youth and the ideals and rebellion of young people determined to make their own way, "Teenage" covers two world wars - one which obliterated the dreams of a romantic generation; the other which unleashed the power of America - and the teenager - on the world. This brilliant mix of wide-ranging research, fast narrative and penetrating analysis, stands entirely alone. It will startle, disturb and amaze, opening readers' eyes to a history never described before.

"... vital, wide-ranging, genre-defying read... a timely reminder that teenagers are not just our future, but our past and inescapable present" -- Daily Telegraph, April 14, 2007

"As vivid, as brilliant and compelling - and persuasive - as its
subject" -- GQ

"Jon Savage is a star...necessary and illuminating" -- Times

"Savage dissects the teen dream and the role industrialisation,
democratisation and the media played in shaping its identity. And he does
so with all the urgency, flair and vitality he argues was lost when
purchasing power became the ultimate teen goal"
-- Metro, April 23, 2007

"Savage has produced a book that may well change how people think about teenagers" -- Guardian, April 14, 2007

'He pulls together the most disparate materials, British, American, German, and French, in an engaging fashion.'
-- TLS

`Painstakingly researched and far reaching `pre-history of the
teenager'... Savage still shows himself to be one of the most skilful
exponents around' -- New Statesman

Jon Savage’s previous book, England’s Dreaming is a landmark work on the punk era.This is even more ambitious, original and important: the untold account of how the twentieth century became the century of Youth – a stunning combination of research, vivid stories and penetrating insight.

Book Description Hardback. Condition: Very Good. The book has been read, but is in excellent condition. Pages are intact and not marred by notes or highlighting. The spine remains undamaged. Seller Inventory # GOR001461094

Book Description Chatto & Windus, 2007. Hardcover. Condition: Good. Small Tears to the Dust Jacket/ Slipcase Good condition is defined as: a copy that has been read but remains in clean condition. All of the pages are intact and the cover is intact and the spine may show signs of wear. The book may have minor markings which are not specifically mentioned. Most items will be dispatched the same or the next working day. Seller Inventory # wbb0014173111

Book Description Chatto & Windus, 2007. Hardcover. Condition: Very Good. Very Good: a copy that has been read, but is in excellent condition. Pages are intact and not marred by notes or highlighting. The spine remains undamaged. Most items will be dispatched the same or the next working day. Seller Inventory # wbb0014990141